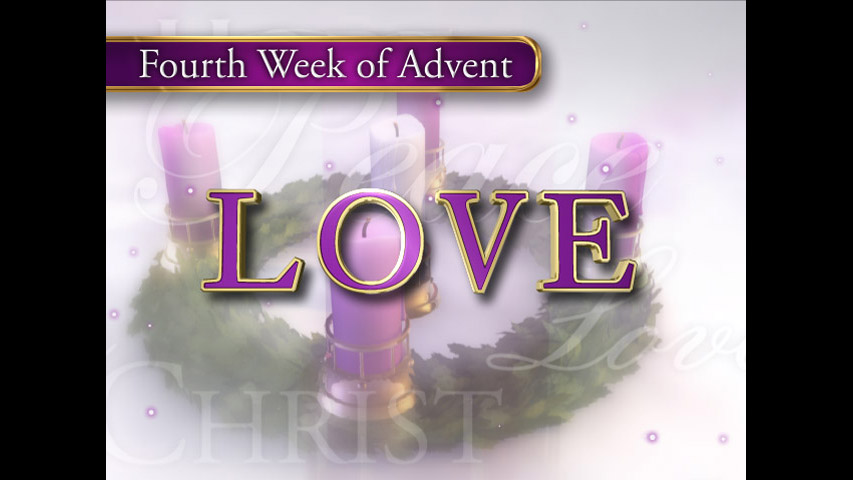 The fourth candle of Advent is the Candle of Love. Its light is meant to remind us of the love that God has for us.

As we prepare to celebrate Christmas, we remember that night so long ago when Jesus was born in a stable. There was a lot of love around that manger. I can imagine the love Mary felt for her newborn son. Even if she knew and understood her son to be the great “I am”, both fully God and fully human, it couldn’t change the deep connection and affection she had for her newborn. But it is not the love represented by the Candle of Love.

I can imagine the love Joseph had for Mary. Here she is having gotten pregnant, Lord only knows how, yet here is Joseph with her at the birth of this child. I know angels visited him to assure him of God’s presence in this whole thing but still he’s got to be thinking, “What’s up?” I don’t know exactly how he feels about the little guy in the manger but clearly Joseph loves Mary, and because he loves Mary, he is there. We see the love of a husband for his wife, and it is a great love. But it is not the love represented by this candle.

The word love is used very loosely these days. It is used to describe our feelings rather than demonstrating action.

Jesus shows us God’s perfect love. He is God’s love in human form. The bible says “God so loved the world that he gave his only Son, so that whoever believes in him should not perish, but have eternal life.”

1 John 4:7-12 7 Dear friends, let us love one another, for love comes from God. Everyone who loves has been born of God and knows God. 8 Whoever does not love does not know God, because God is love. 9 This is how God showed his love among us: He sent his one and only Son into the world that we might live through him. 10 This is love: not that we loved God, but that he loved us and sent his Son as an atoning sacrifice for our sins. 11 Dear friends, since God so loved us, we also ought to love one another. 12 No one has ever seen God; but if we love one another, God lives in us and his love is made complete in us.

There is a story about a man named Doug Nichols. He went to India to be a missionary there, but while he was just starting to study the language he became infected with tuberculosis and had to be put in a sanitarium. It was not a very good place to be. It was not very clean and conditions were difficult because there were so many sick people there.

My daughter, Mary, and I went to India for several weeks to minister to those living in the slums. We worked chiefly with children. Conditions were dreadful. Human suffering was at an unimaginable level. I can envision what it was like for this missionary.

Doug decided to do the best he could in the situation. So, he took a bunch of Christian books and tracts and tried to witness to the other patients in the sanitarium. But when he tried to pass out tracts, they were rejected. No one wanted them. He tried to witness, but he was handicapped because of his inability to communicate in their language, and he felt so very discouraged.

Here he was. Because of his illness, he would be there a long time. But it seemed like the work that he had been sent to do would not be done because no one would listen to him.

Because of his tuberculosis, every night at about 2 o’clock he would wake up with chronic coughing that wouldn’t quit. Then one night when he awoke he noticed across the aisle an old man trying to get out of bed. He said the man would roll himself up into a little ball and teeter back and forth trying to get up the momentum to get up and stand on his feet. But he just couldn’t do it. He was too weak.

Finally, after several attempts the old man laid back and wept. The next morning Doug understood why the man was weeping. He was trying to get up to go to the bathroom and didn’t have enough strength to do that. So, his bed was a mess and there was a smell in the air.

The other patients made fun of the old man. The nurses came to clean up his bed and they weren’t kind to him, either. In fact, one of them even slapped him in the face. Doug said that the old man just laid there and cried.

Doug said, that next night about 2 o’clock I started coughing again. I looked across the way and there was the old man trying to get out of bed once more. I really didn’t want to do it, but somehow, I managed to get up and I walked across the aisle and I helped the old man stand up.

But he was too weak to walk, so Doug said, I took him in my arms and carried him like a baby. He was so light that it wasn’t a difficult task. I took him into the bathroom, which was nothing more than a dirty hole in the floor (that was a typical Indian bathroom). I stood behind him and cradled him in my arms as he took care of himself. Then I carried him back to his bed and laid him down.

Doug said, “The next morning there were patients waiting when I awoke and they asked if they could read some of the books and tracts that I had brought. Others had questions about the God I worshiped and His only begotten Son who came into the world to die for their sins.”

He said, “Now what did I do? I didn’t preach a sermon. I couldn’t even communicate in their language. All I did was take an old man to the bathroom and anyone can do that.”

All the words and all the good deeds in the world become meaningless without love.

God is love. He doesn’t just love, He is love. God has shown his love by giving up the life of His son for the benefit of others. In this, God’s love surpasses any profession of love ever made by any man ever. God’s love made the ultimate sacrifice for you and I.

God’s love. It’s easy to confuse our idea of love with God’s. Love, the commitment, not the emotion is what is symbolized when we light this candle, and it is the supreme quality of God. Light the candles of Hope, Peace, Joy and Love.

Jesus came to put skin on love, to show us the depth of God’s love. The love symbolized by this candle is sacrificial. Jesus told his disciples:

This is my commandment: Love each other in the same way I have loved you.13 There is no greater love than to lay down one’s life for one’s friends. John 15:12-13 (NLT)

1 Corinthians 13 4-7 describes what laying down your life means.  4 Love is patient and kind. Love is not jealous or boastful or proud 5 or rude. It does not demand its own way. It is not irritable, and it keeps no record of being wronged. 6 It does not rejoice about injustice but rejoices whenever the truth wins out. 7 Love never gives up, never loses faith, is always hopeful, and endures through every circumstance.