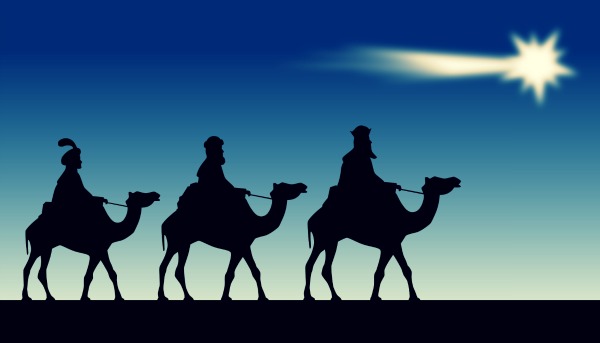 I read this humorous account of the Wise Men.

Matthew is the only one of the four gospels to mention the Magi. Matthew reports that they came “from the east” to worship the “king of the Jews”.  The gospel never mentions the number of Magi, but most western Christian denominations have traditionally assumed them to have been three in number, based on the statement that they brought three gifts. In Eastern Christianity the Magi often number twelve. Their identification as kings in later Christian writings is probably linked to Psalm 72:11, “May all kings fall down before him.”

Traditional nativity scenes depict three “Wise Men” visiting the infant Jesus on the night of his birth, in a manger accompanied by the shepherds and angels. This allows allowing the two separate scenes of the Adoration of the Shepherds on the birth night and the later Adoration of the Magi to be combined for convenience.

9  And the star they had seen in the east guided them to Bethlehem. It went ahead of them and stopped over the place where the child was. 10 When they saw the star, they were filled with joy! 11 They entered the house and saw the child with his mother, Mary, and they bowed down and worshiped him. Then they opened their treasure chests and gave him gifts of gold, frankincense, and myrrh. 12 When it was time to leave, they returned to their own country by another route, for God had warned them in a dream not to return to Herod.

So, I was thinking, Ephesians 5:15 says, “Be very careful, then, how you live—not as unwise but as wise…” There are many references in both the Old and New Testament indicating being wise is something we should strive towards.

So, what made the wise men wise?

First of all, the wise men had a knowledge of God’s Word. They had read and studied and understood the prophecies about the coming messiah. Numbers 24:17 “I see him, but not now; I behold him, but not near. A star will come out of Jacob; a scepter will rise out of Israel. He will crush the foreheads of Moab, the skulls of all the sons of Sheth.”

They were looking for a rising star. They were men who had studied the skies and noticed something different. They saw something that must have convinced them that the king they were waiting for had finally come. This star in the night sky was something quite extraordinary. It could not have been a supernova, or a conjunction of planets, as some modern theorists have suggested. That’s because this star moved in the sky and then later hovered over one place. The little town of Bethlehem.

The exciting thing about this is that we have the scriptures available to us as well. We have the ability to read it and study it and gain insight and wisdom from it. We not only have the Bible, but we have the Holy Spirit of God that helps to guide us, enlighten us, and convict us. Jesus said, “I will not leave you alone. I will send you the comforter, the Holy Spirit, to guide you into all truth.”

We have a supernatural ability to understand God’s Word. If you want to be wise, you already have everything it takes. You simply need to open it up and read it. The more you study, the wiser you get.

They were simply armed with their knowledge of the scriptures, their faith in God, and a star that suddenly appeared.

The question I have is why didn’t the Jewish leaders in the area of Bethlehem go and seek out the Messiah. They had the same scriptures. They knew the prophecies. In fact, it was these Jewish teachers and priests that told Herod that the Messiah would be born in Bethlehem. They had the same knowledge that the wise men had, the difference was their faith.

All the knowledge in the world doesn’t do us any good unless we act on it; unless we take that step of faith. Jesus was not welcomed into the world by His own people, but by lowly shepherds, and visitors from afar.

That’s the next thing that shows us that these wise men were wise, they came with a spirit of worship. I read an article that said that the gifts they gave spoke a lot about their understanding of who Jesus was. The gift of gold was a gift that would be given to a king. It was a present that recognized the fact that Jesus was King of Kings and Lord of Lords. The incense (frankincense) was a gift generally given to God. Incense offerings were given as a way of pleasing God. This gift indicated that they understood that the child was more than just a common man. They understood that they were witnessing God with us. This is also obvious in the fact that they bowed down and worshiped Him.

Myrrh was a gift usually given at a funeral. It was used in the burial customs. So, at some level they must have understood His purpose as the suffering servant.

The way in which the wise men worshiped Jesus showed that they had a real understanding of who He was and a solid belief that He was indeed the Messiah. They had the wisdom to see Him for who he really was, even though he was just a young child.

We see that the wise men were wise because they were open to God’s leading. Earlier in the story King Herod had met with the wise men in secret. He had discovered from them the exact time the star had appeared and he had asked them to come back and report on the exact location of the child. He claimed that he wanted to go and worship him too, but he had no intention of worshiping Jesus, he simply wanted to eliminate any potential threat to his rule.

The story seems to suggest that the Magi had every intention of going back to Herod and informing him of the location of Jesus. But God spoke to them in a dream. He warned the wise men not to go back to Herod, but to go home another way.

As we strive for wisdom, we learn from the wise men.

We seek after the Word of God through the study of the scriptures and through daily prayer and we have the Holy Spirit of God that helps to guide us. We have faith in God’s promises. We know His promises and we believe them. We must come with a spirit of worship and we follow God’s leading.

There is a poem that says: