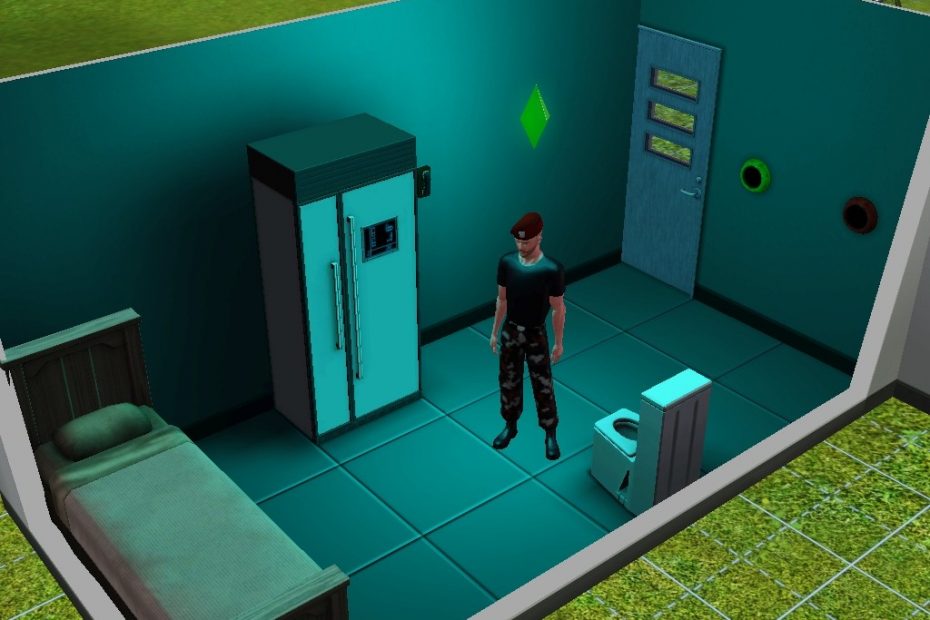 A panic room or safe room is a fortified room that is installed to provide a safe shelter, or hiding place, in the event of a break in, home invasion, tornado, terror attack, or other threat. Panic rooms usually contain communications equipment, so that law enforcement authorities can be contacted. There may also be a monitor for external security cameras and an alarm system. They may have a gun closet, a biodefense air-filtration system that removes biological and nuclear contaminants, and a panic button that locks down the entire house. Panic rooms can be hidden behind  mirrors, wardrobes, bookcases, sliding bookcases, and even fireplaces. They can have walls and a door reinforced with sheets of steel, Kevlar, or bullet-resistant fiberglass. Some safe rooms may also have externally vented ventilation systems and a separate telephone connection. They might also connect to an escape shaft.

When we think of the future, we are faced with the daily reminder that we live in a sketchy world. In the USA, and in everywhere else on the planet, there is a lack of security. We can put all the people we want to into active duty, to beef up Home Land Security, and yet, there is still insecurity.

We battle with our mortal bodies. We hear of more and more people who are coming down with sicknesses, cancers, and other previously unheard of ailments. Our prayer lists are full of those who are in dire need of miracles. So, what is a Christian to do when it is so easy to panic?

Karen Rinaldi was driving her car to work on Tuesday, December 15th, 1998. As she would tell it later it was just like any other Tuesday drive to work. As usual she was running a bit late and she was driving faster than she should have been. Driving along listening to traffic and weather reports she was barely paying attention to the road that she traveled down five days a week for the prior eight years.

It all happened so suddenly. She came around a bend in the road and had to swerve to miss the large boulder that was right in her path. When she veered her car to the right Karen lost control of the car and it went off the road and toward the lake on the side of the road. Despite her best efforts, the car plunged into the lake and began to sink to the bottom. In a state of panic Karen could not get out of the car before it was completely submerged in water. Now hysterical, all Karen could do was scream. When she tired of doing that she once again tried to exit the vehicle, but the pressure of the water on the doors held her captive. Nothing she tried worked and she sat back and began to cry knowing it was hopeless and knowing no one was coming to help. Then she remembered her cell phone and quickly got it out of her purse and dialed 911.

Surveys have proven this is one of the favorite Psalms. It was found to be one of the 50 favorite passages of many Christians. Yet this is the Psalm known by the devil and quoted by him in Matt. 4:11-12 when he tempted Christ.

The Christians 911. Psalm 91:1 “Whoever dwells in the shelter of the Most High will rest in the shadow of the Almighty.”

We are to dwell in the shelter of the Most High. A dwelling refers to a place where one calls home. A shelter is a place of protection, a place of covering, a place of security and a shadow is never found far from the object of the shadow.

Psalm 91:3 “For He will rescue you from every trap and protect you from deadly disease.”

A trapper is one who hunts and uses hidden traps designed to take its prey by surprise. God delivers us from the unseen, hidden traps of Satan, who intends to take us captive by them.

After a forest fire in Yellowstone National Park, forest rangers began their trek up a mountain to assess the damage. One ranger found a bird literally petrified in ashes, perched statuesquely on the ground at the base of a tree. Startled by the eerie sight, he knocked over the bird with a stick. When he struck it, three tiny chicks scurried from under their dead mother’s wings. The mother, aware of impending disaster, had carried her offspring to the base of the tree and had gathered them under her wings. She could have flown to safety but refused to abandon her babies. When the blaze had arrived and the heat had scorched her, the mother had remained steadfast. She had been willing to die so that those under the cover of her wings would live.

Psalm 91:5 “You will not fear the terror of night, nor the arrow that flies by day.”

Tribal wars are nothing new in Central Africa. A few years ago, a war between the Tutsi and Hutu tribes spilled over the boundaries of 8 African countries, with atrocities on both sides. In one case, in a Christian village in the Congo, Tutsi soldiers broke down the door of a young Hutu preacher’s house and stood poised to slaughter the entire family. “Wait,” the preacher begged. “Please allow us a moment to pray before we die.” The request was angrily granted and the family knelt to pray.

But the expected shots never came. After praying, the family slowly stood up and discovered that the soldiers were gone, not only out of their house, but out of their village, too. Several months later, as the young preacher was telling this story in a church meeting in a nearby town, he heard a voice from the back saying, “I can tell you what happened.” It was one of the Tutsi soldiers.

“I was one of those who broke into your house,” he said. “I had your children in my sights as you knelt and prayed. Suddenly, a tremendous wall of fire surrounded you. We couldn’t even see beyond the flames and we knew the house would burn down with you in it, so we got out.”

“Then, when we were outside and saw your house engulfed in flames and yet not being destroyed, we fled out of your village as well. We realized that this was not a kind of fire we are familiar with, but a fire sent by God. “And if this is how your God responds, I want to know Him too. I am tired of the fighting and killing. That is why I came here tonight.”

Psalm 91:6 nor the pestilence that stalks in the darkness, nor the plague that destroys at midday.

Pestilence destroys the crops and the economy and is often seen as a judgement of God. The burning heat of the sun at midday is drought. The enemy loves to turn up the heat but do not panic. Jesus knew the real enemy is fear itself. He constantly warned His disciples not to be afraid.

Psalm 91:7-10 “A thousand may fall at your side, ten thousand at your right hand, but it will not come near you. Just open your eyes, and see how the wicked are punished. If you say, “The Lord is my refuge,” and you make the Most High your dwelling, no harm will overtake you, no disaster will come near your tent.”

If God is our refuge, our place of safety, we are eternally safe in God.

Psalm 91:11 “For He will order His angels to protect you wherever you go.”

God gives orders, commands, directly to the angels regarding you and me. Isn’t it amazing to know that God has appointed a group of angels to guard and protect us.

Psalm 91:12 They will hold you up with their hands so you won’t even hurt your foot on a stone.

Jesus, Himself, was protected by the angels of God when the people from Nazareth wanted to throw Him from the cliff. (see Luke 4). To throw someone down was the beginning of stoning them. They would want to break the person’s leg, or cause them such an injury that he would not be able to run away or duck. The angels ensured that Jesus would not dash His foot against a stone, or be injured by a stone in any other way. His time had not yet come.

Psalm 91:13 You will trample upon lions and cobras; you will crush fierce lions and serpents under your feet!

What appears to be above your head is really under your feet. The devil is called a roaring lion, the old serpent. Be at peace in God. Satan is defeated. Crushed and trampled by our Almighty God.

Psalm 91:14-16 “Because he loves me,” says the Lord, “I will rescue him; I will protect him, for he acknowledges my name. He will call on me, and I will answer him; I will be with him in trouble, I will deliver him and honor him. With long-life, I will satisfy him and show him my salvation.”

September 11th, 2001 just past 9:00am, Stanley Praimnath, Vice President for Fuji Bank, was in his office in the South Tower at WTC when his phone rang. “Are you watching the news?’ asked a woman in the Chicago office. “Are you alright?” “I’m fine” he said wondering why she had called. Just then he turned to gaze out the window at the Statue of Liberty, as had been his routine. The surreal sight of a low-flying commercial jet, heading straight for his tower disrupted his view. He dropped the phone in mid-sentence and dove to the floor. Curling under his desk he began praying to God, “Lord, help me” he prayed desperately as the aircraft smashed into the tower.

The smell of jet fuel in the air, equipment scattered all around, rubble covering the floor, dust in the air, he began clawing across mounds of debris. “Lord, I have to go home to my family,” he wheezed. “I have to see my daughters.” Just then he saw a light. “I am here to help you.” He thought, “This is my guardian angel! The Lord sent somebody to help me!” Praimnath’s guardian angel was Brian Clark, a Christian who was an executive 3 floors below. The 2 miraculously climbed out of the rubble to safety. Praimnath stated, “My Lord has some unfinished tasks for me.” “I took the tattered clothes I was wearing that day, put them in a box, and wrote DELIVERANCE all over it. I told my wife, ‘if I ever get spiritually cold, I want you to bring this box to me, open it up, and show me what the Lord brought me from.”

We may love Him because He first loved us, but with that love comes our salvation and God’s continued protection. We pray to Him in time of trouble, we use His name in prayer and we have the assurance that He will listen and He will answer.

We have no idea how long the onslaught of trouble might last, but it will pass and we will have eternal salvation. Remember the Eternal, Omnipotent, Omniscient, Ever-Present God is not only our refuge but is our strength.” Know Him. Love Him. Trust Him.