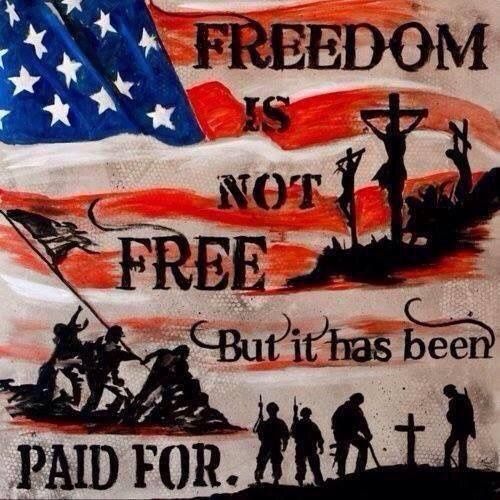 President Ronald Reagan, gave a Memorial Day speech at Normandy on the 40th anniversary of the D-Day invasion of France that led to the destruction and ultimate surrender of Nazi Germany.

It in he said, “We stand on a lonely, windswept point on the northern shore of France. The air is soft, but 40 years ago, at this moment, the air was dense with smoke and the cries of men, and the air was filled with the crack of rifle fire and the roar of cannon. At dawn, on the morning of the 6th of June, 1944, 225 Rangers jumped off the British landing craft and ran to the bottom of these cliffs.

Their mission was one of the most difficult and daring of the invasion: to climb these sheer and desolate cliffs and take out the enemy guns. The Allies had been told that some of the mightiest of these guns were here and they would be trained on the beaches to stop the Allied advance.

The Rangers looked up and saw the enemy soldiers at the edge of the cliffs shooting down at them with machine guns and throwing grenades. And the American Rangers began to climb. They shot rope ladders over the face of these cliffs and began to pull themselves up. When one Ranger fell, another would take his place. When one rope was cut, a Ranger would grab another and begin his climb again. They climbed, shot back, and held their footing.

Soon, one by one, the Rangers pulled themselves over the top, and in seizing the firm land at the top of these cliffs, they began to seize back the continent of Europe. Two hundred and twenty-five came here. After two days of fighting, only 90 could still bear arms.

Memorial Day began with the custom of placing flowers on the graves of the war on May 5, 1866, in Waterloo, NY, and Waterloo has been recognized by Congress as the official birthplace of Memorial Day. In 1868, Gen. John A. Logan, then president of the Grand Army of the Republic, declared that May 30 would be a day to decorate with “flowers the graves of comrades who died in defense of their country during the late rebellion.” After World War I the day was set aside to honor the fallen in all American wars.

We recognize Memorial Day, May 25, to honor those who laid down their lives to make America what it is today–free, strong, and a nation worth fighting for.

In the Revolutionary War over 25,000 gave their life.

That’s well over a million lives that have been sacrificed for our freedom and the freedom of others around the world.

Protecting our freedom has come at a great cost. President Franklin Roosevelt said: “Those who have long enjoyed such privileges as we enjoy forget in time that men have died to win them.” On this Memorial Day weekend, may we never be guilty of forgetting those who gave all on behalf of our nation.

2 This is what Isaiah son of Amoz saw concerning Judah and Jerusalem: 2 In the last days the mountain of the Lord’s temple will be established as the highest of the mountains; it will be exalted above the hills, and all nations will stream to it.

3 Many peoples will come and say, “Come, let us go up to the mountain of the Lord, to the temple of the God of Jacob.
He will teach us his ways, so that we may walk in his paths.”
The law will go out from Zion, the word of the Lord from Jerusalem.
4 He will judge between the nations and will settle disputes for many peoples. They will beat their swords into plowshares and their spears into pruning hooks. Nation will not take up sword against nation, nor will they train for war anymore. Come, descendants of Jacob, let us walk in the light of the Lord.

Let us walk in the light of the Lord. We as Christians are to walk in the light of the Lord and reflect that light. Nature can illustrate many spiritual truths. When I visited the Kennedy Space Center in Florida, I was able to look at and touch a moon rock. The moon rock, brought to earth after the moon landing, is dull and ordinary looking itself. It has no brilliance or light of its own. Yet it is the most highly reflective material that man has yet discovered.

We need to be like a moon rock. Let us walk closely in the light of the Lord as the closer we get, the more fully we reflect His light. One day, He will return and when He does, there will be peace, not war.

I watched the flag pass by one day.
It fluttered in the breeze.
A young Marine saluted it,
and then he stood at ease.
I looked at him in uniform
So young, so tall, so proud,
He’d stand out in any crowd.
I thought how many men like him
Had fallen through the years.
How many died on foreign soil?
How many mothers’ tears?
How many pilots’ planes shot down?
How many died at sea?
How many foxholes were soldiers’ graves?
No, freedom isn’t free.
I heard the sound of TAPS one night,
When everything was still
I listened to the bugler play
And felt a sudden chill.
I wondered just how many times
That TAPS had meant “Amen,”
When a flag had draped a coffin
Of a brother or a friend.
I thought of all the children,
Of the mothers and the wives,
Of fathers, sons and husbands
With interrupted lives.
I thought about a graveyard
At the bottom of the sea
Of unmarked graves in Arlington.
No, freedom isn’t free.