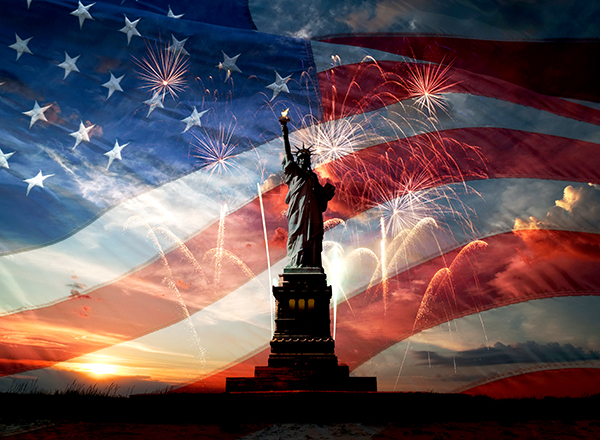 Joshua 24:15 – But if serving the Lord seems undesirable to you, then choose for yourselves this day whom you will serve, whether the gods your ancestors served beyond the Euphrates, or the gods of the Amorites, in whose land you are living. But as for me and my household, we will serve the Lord.”

This Saturday, as you know, is Independence Day. We celebrate in many ways. Usually food, fireworks, friends and family gatherings are part of the festivities.

History tells us, when the conflict with England had begun, many patriots  declared their allegiance to the country. Patrick Henry in his famous speech before the Virginia Provincial Convention, addressing those sitting on the fence, said,

It is in vain, sir, to extenuate the matter. Gentlemen may cry, Peace, Peace but there is no peace. The war is actually begun! The next gale that sweeps from the north will bring to our ears the clash of resounding arms! Our brethren are already in the field! Why stand we here idle? What is it that gentleman wish? What would they have? Is life so dear, or peace so sweet, as to be purchased at the price of chains and slavery. Forbid it, almighty God! I know not what course others may take, but as for me, give me liberty, or give me death.

Then came the boldest declaration of all, the Declaration of Independence on July 4, 1776, signed by 56 representatives from the 13 colonies in which they voted to declare that they would accept nothing less than absolute freedom from England. From there, the declaration was read before the militia troops in the field on July 9th, and from there to the rest of the world.

In it, the Americans challenged the most powerful empire of the world. And they entered the war with neither a navy nor an army. Their fighting forces consisted solely of untrained militia units made up of citizen-soldiers from the various colonies.

On the other side, England had an army of well trained, highly disciplined soldiers, as well as the strongest navy on earth at the time. The founding fathers and many other courageous patriots made a declaration. They pledged their lives and their allegiance to their country.

They paid a high price for that declaration.

After the Americans declared their independence, they had to win it by force. The task proved difficult partly because the people never fully united behind the war effort. About 1/3 of the colonists were not concerned about the outcome of the war. They were indifferent and openly supported neither side. And as many as 1/3 of the population aligned themselves with Britain and called themselves “Loyalists” for their loyalty to King George. These problems meant that victory in the Revolutionary War depended on patriots who made up less than 1/3 of the entire population. For a population the size of America’s in that day, the casualties were high. 7,200 Americans were killed in battle during the Revolutionary War; 8,200 were wounded; 10,000 died from disease and exposure; an additional 6,500 died in prison after being captured; and 1,400 soldiers were listed as MIA..

* 5 were captured by the British and tortured before they died.

* 12 had their homes ransacked and burned.

* 2 lost their sons in the Revolutionary Army.

* Another 2 sons were captured.

* 9 of the 56 fought and died from wounds or hardship from the war.

* One of the signers, Carter Braxton of Virginia, a wealthy planter and trader, saw his ships sunk by the British Navy. He sold his home and properties to pay his debts and died in poverty.

* At the battle of Yorktown, the British General Cornwallis had taken over Thomas Nelson’s home for his headquarters. Nelson ordered George Washington to open fire on his own home. The home was destroyed, and Nelson died bankrupt.

* John Hart was driven from his wife’s side as she was dying. Their 13 children fled for their lives and his fields were destroyed. For over a year he lived in forests and caves, returning home only to find his wife had died and his children had vanished. A few weeks later, he himself died from exhaustion.

The war that began in April 1775, officially ended with the treaty of Paris in 1783. The Americans made a declaration, they paid a high price, and they reaped a great reward. They won their independence and freedom not just for themselves, but for all Americans. And a nation was born. A nation where every person could be free and have something to say about how they were governed.

And though the signers of that declaration paid a high price, many of them later reaped a great reward.

* 2 of the signers became presidents…

* dozens of others held other high political offices…

* and all of them have the everlasting gratefulness of the American people.

The Patriots made the declaration; they paid the price; and they reaped the reward; freedom, a new land, a new country.

If you call yourself a disciple of Christ, you too have made a declaration. Remember the day when you openly confessed Jesus as your Lord and Savior? Remember the day you were baptized, publicly declaring your faith in the death, burial and resurrection of Jesus Christ? (If you haven’t done that and want to, talk to me) In doing these things, you are making a declaration. A declaration of independence from the world and pledging your allegiance to Jesus Christ.

This declaration is as powerful as the one Joshua made in Joshua 24:15 – But if serving the Lord seems undesirable to you, then choose for yourselves this day whom you will serve, whether the gods your ancestors served beyond the Euphrates, or the gods of the Amorites, in whose land you are living. But as for me and my household, we will serve the Lord.”

When you pledged your allegiance to the Lord you made a declaration.

Like the patriots, we must also pay a high price. It’s one thing to make a declaration but it’s another to live up to it, to pay the price on the battlefields of our daily lives. Most of the time, saying words is the easy part; the actions are much tougher.

You know, on that day when Joshua made his declaration, he wasn’t alone. Others also did. They said similar words in verses 16-18. 16 Then the people answered, “Far be it from us to forsake the Lord to serve other gods! 17 It was the Lord our God himself who brought us and our parents up out of Egypt, from that land of slavery, and performed those great signs before our eyes. He protected us on our entire journey and among all the nations through which we traveled. 18 And the Lord drove out before us all the nations, including the Amorites, who lived in the land. We too will serve the Lord, because he is our God.”

We who are in the Lord’s Army find, just like the Patriots found in the American Revolution, that our war is hard to win.

Paul says in Ephesians 6:12 We’re declaring war “against principalities, against powers, against the rulers of the darkness of this world, against spiritual wickedness in high places.”

There are real battles to be fought; real struggles to overcome. We’re called upon by Scripture to “finish our course,” “fight the good fight,”

In Romans 8:18 Paul said, “For I reckon that the sufferings of this present time are not worthy to be compared with the glory which shall be revealed in us.” One day those who have fought the battle valiantly in this life will stand before the Lord in all His glory and receive crowns for their faithful service for Him.

They will receive the greatest of all commendations one can receive: “Well done, good and faithful servant.”