Time to Give Thanks 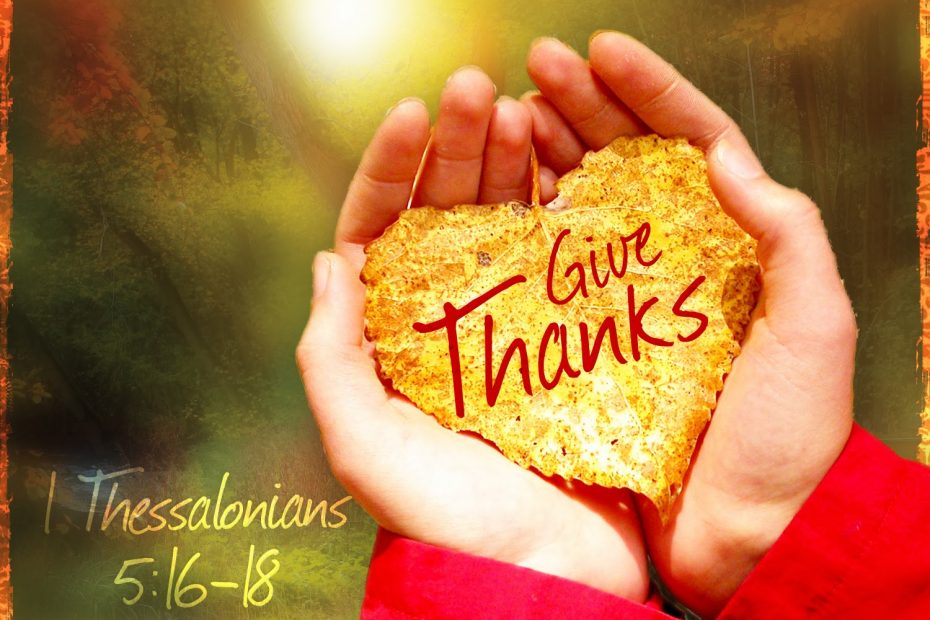 TIME TO GIVE THANKS

“It has been an unchallengeable American doctrine that cranberry sauce, a pink goo with overtones of sugared tomatoes, is a delectable necessity of the Thanksgiving board and that turkey is uneatable without it.” – Alistair Cooke

“Thanksgiving, man. Not a good day to be my pants.” – Kevin James

“Reflect upon your present blessings, of which every man has plenty; not on your past misfortunes, of which all men have some.” – Charles Dickens

“Truly appreciate life, and you’ll find that you have more of it.” – Ralph Marston

“Be thankful for what you have; you’ll end up having more. If you concentrate on what you don’t have, you will never, ever have enough.” – Oprah Winfrey

“Thanksgiving is the holiday of peace, the celebration of work and the simple life… a true folk-festival that speaks the poetry of the turn of the seasons, the beauty of seedtime and harvest, the ripe product of the year — and the deep, deep connection of all these things with God.” – Ray Stannard Baker

In 1621 the Pilgrims celebrated the 1st Thanksgiving after surviving the first winter in the New World, at Plymouth.  Gov. Bradford’s Thanksgiving Proclamation: “Inasmuch as the great Father has given us this year an abundant harvest of Indian corn, wheat, peas, beans, squashes, and garden vegetables, and has made the forests to abound with game and the sea with fish and clams, and inasmuch as He has protected us from the ravages of the savages, has spared us from pestilence and disease, has granted us freedom to worship God according to the dictates of our own conscience.

Now I, your magistrate, do proclaim that all ye Pilgrims, with your wives and ye little ones, do gather at ye meeting house, on ye hill, between the hours of 9 and 12 in the daytime, on Thursday, November 29th, of the year of our Lord, 1623, and the third year since ye Pilgrims landed on ye Pilgrim Rock, there to listen to ye pastor and render thanksgiving to ye Almighty God for all His blessings.”

In 1789, Pres. George Washington issued a Thanksgiving Day Proclamation: “Whereas it is the duty of all Nations to acknowledge the providence of Almighty God, to obey his will, to be grateful for his benefits, and humbly to implore his protection and favor—and whereas both Houses of Congress have by their joint Committee requested me “to recommend to the People of the United States a day of public thanksgiving and prayer to be observed by acknowledging with grateful hearts the many signal favors of Almighty God especially by affording them an opportunity peaceably to establish a form of government for their safety and happiness.” Now therefore I do recommend and assign Thursday the 26th day of November next to be devoted by the People of these States to the service of that great and glorious Being, who is the beneficent Author of all the good that was, that is, or that will be—That we may then all unite in rendering unto him our sincere and humble thanks—for his kind care and protection of the People of this Country.”

So, that’s how Thanksgiving started. So how did all the traditions evolve?

Turkey is synonymous with Thanksgiving. We envision the pilgrims and Wampanoag tribe of Native Americans chowing down on a roast bird in 1621. Although we don’t know the exact menu of that first Plymouth Colony feast, a first-person account of the year’s harvest from governor William Bradford does reference “a great store of wild turkeys,” and another first-person account, from colonist Edward Winslow, confirms that the settlers “killed as much fowl as … served the company almost a week.” English settlers were accustomed to eating fowl on holidays, but for early Americans, chickens were more valued for their eggs than their meat, and rooster was tough and unappetizing. Meanwhile, turkeys were easy to keep, big enough to feed a whole family, and cheaper than ducks or geese.

According to the National Turkey Federation, 88 percent of Americans will eat turkey in some form on Thanksgiving Day. An estimated 44 million birds!

Stuffing would have been a familiar to those early settlers as well, although their version was likely quite different from what we’re used to. We know that the first Plymouth colonists didn’t have access to white flour or butter, so traditional bread stuffing wouldn’t have been possible yet. They may have used chestnuts, herbs, and chunks of onion to flavor the birds, all of which were already part of the local diet. We’re still stuffing turkeys as a way to keep the bird moist through the roasting process and add extra flavor.

Like turkeys, cranberries were widely available in the area, a truly American food, as one of only a few fruits along with Concord grapes, blueberries, and pawpaws that originated in North America.

Potatoes weren’t yet available in 17th-century Plymouth, so how did mashed potatoes become another Thanksgiving superstar? In 1817, New York became the first state to officially adopt the holiday, and others soon followed suit, but Thanksgiving wasn’t a national day of celebration until Abraham Lincoln declared it so in 1863.

Why did Lincoln, hands full with an ongoing war,take up the cause? Largely due to a 36-year campaign from Sarah Josepha Hale, a prolific novelist, poet, and editor, who saw in Thanksgiving a moral benefit for families and communities. In addition to her frequent appeals to officials and presidents, Hale wrote about the holiday in her 1827 novel Northwood, as well as in the womens’ magazine she edited, Godey’s Lady’s Book. Her writing included recipes and descriptions of idealized Thanksgiving meals, which often featured mashed potatoes.

Some type of gravy accompanied the turkey or venison at the earliest Thanksgiving gatherings. The concept of cooking meat in sauce dates back hundreds of years, and the word “gravy” itself can be found in a cookbook from 1390. Because that first celebration extended over three days, that sounds suspiciously like the beginning of another great Thanksgiving tradition: leftovers!

Corn is a natural symbol of harvest season. We know that corn was a staple of the Native American diet and would have been plentiful in the 17th century. Their version would have been prepared differently. Corn was either made into a cornmeal bread or mashed and boiled into a thick porridge-like consistency.

Sweet potatoes represent our African-American culture. Sweet potatoes became a standard in southern homes and with plantation workers, who used them as a substitution for the yams they’d loved in their homeland.

Green bean casserole is a modern contribution to the Thanksgiving meal. The recipe you probably know was whipped up in 1955 by Dorcas Reilly, a home economist working in the Campbell’s Soup Company test kitchens in Camden, New Jersey. Reilly’s job was to create limited-ingredient recipes that housewives could quickly replicate (using Campbell’s products, of course). Her original recipe (still available at Campbells.com), contains just six ingredients: Campbell’s Cream of Mushroom soup, green beans, milk, soy sauce, pepper, and French’s French Fried Onions. Campbell’s now estimates that 30 percent of their Cream of Mushroom soup is bought specifically for use in a green bean casserole.

Like cranberries, pumpkin pie does have ties to the original Thanksgiving. Native Americans were already using pumpkins as a dessert. Both squash and pumpkin were baked, usually by being placed whole in the ashes or embers of a dying fire and they were moistened afterwards with some form of animal fat, or maple syrup, or honey.

Psalm 100 Enter his gates with thanksgiving and his courts with praise; give thanks to him and praise his name. For the Lord is good and his love endures forever; his faithfulness continues through all generations.

Since 1924, in New York City, the Macy’s Thanksgiving Day Parade is held annually every Thanksgiving Day. The parade features parade floats with specific themes, performances from Broadway musicals, large balloons of cartoon characters, TV personalities, and high school marching bands. The float that traditionally ends the Macy’s Parade is the Santa Claus float, the arrival of which is an unofficial sign of the beginning of the Christmas season. It is billed as the world’s largest parade.

2020 has been a challenging year for all of us. It is easy to lose focus when so much changes and stress takes center stage in our lives and our families and friends lives.

But it is time to refocus on how much we have to be grateful for.

Heavenly Father, on Thanksgiving Day
We bow our hearts to You and pray.
We give You thanks for all You’ve done
Especially for the gift of Jesus, Your Son.
For beauty in nature, Your glory we see
For joy and health, friends and family,
For daily provision, Your mercy and care
These are the blessings You graciously share.
So today we offer this response of praise
With a promise to follow You all of our days.