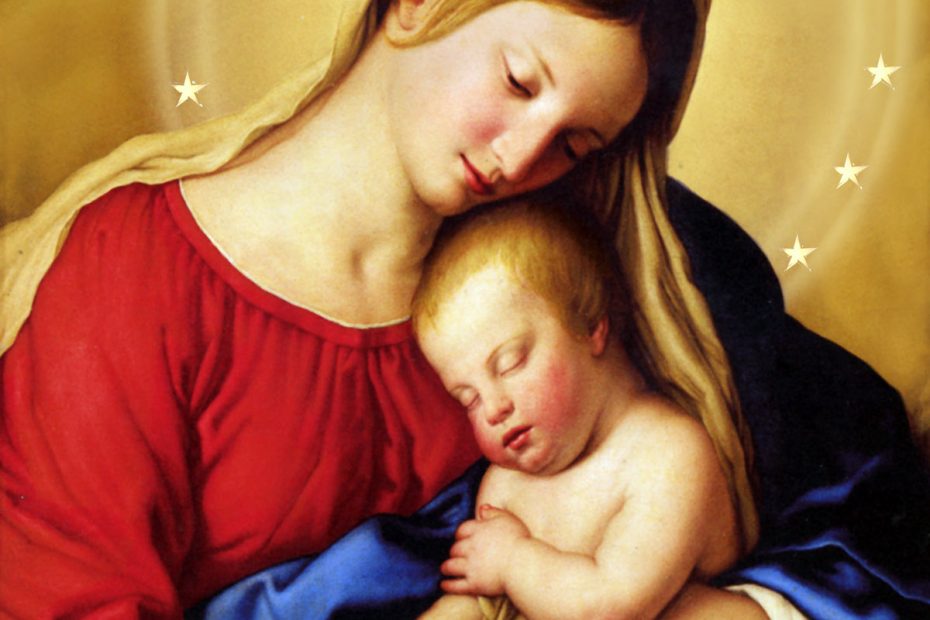 The angel came to her and said, “Greetings! The Lord has blessed you and is with you.” But Mary was very confused by what the angel said. Mary wondered, “What does this mean?” The angel said to her, “Don’t be afraid, Mary, because God is pleased with you. Listen! You will become pregnant. You will give birth to a son, and you will name him Jesus. He will be great, and people will call him the Son of the Most High. The Lord God will give him the throne of King David, his ancestor. He will rule over the people of Jacob forever. His kingdom will never end.”

Mary said to the angel, “How will this happen? I am a virgin!” The angel said to Mary, “The Holy Spirit will come upon you, and the power of the Most High will cover you. The baby will be holy. He will be called the Son of God.

Now listen! Elizabeth, your relative, is very old. But she is also pregnant with a son. Everyone thought she could not have a baby, but she has been pregnant for six months. God can do everything!”

Mary said, “I am the servant girl of the Lord. Let this happen to me as you say!” Then the angel went away.

Nazareth bears no significance. It is in the middle of nowhere. It’s known as “The Detroit of Israel” because they made cars there. The Sussita was one brand, but the manufacturing is all but gone today. You can go and see the traditional location of Mary and Joseph’s home, but there is little evidence to prove this was the case.

Mary is betrothed to Joseph, a working-class carpenter. Betrothal is not the same as engagement. It is a legal, binding contract where parents agreed that their children would marry and it occurred soon after puberty. Part of that contract was the guarantee of her virginity. Betrothal lasted about a year. During that year, the girl would prove her faithfulness. And during that same year, the boy would prepare a home for her, a place for her, usually with an addition to his father’s house.

So, given the culture of that day, her identity as a virgin, and her betrothal, Mary was likely around 13 years old. As a young girl, she would be betrothed early into her puberty. The fact that Luke identifies her as a virgin is important. Some want to discredit the virgin birth and say that Luke’s use of the word virgin is better translated as “young woman.” That is not the case. Luke used the word parthenos. It means “one who has had no sexual relation”.

All this accounts for why Mary is so confused when Gabriel announces she will give birth to a son. She’s not questioning the message. She’s confused about how she could be pregnant.

Mary was a person full of Grace. She was the vessel. She was the servant. Mary said, “My soul magnifies the Lord, and my spirit rejoices in God my Savior, for he has looked on the humble estate of his servant. For behold, from now on all generations will call me blessed; for he who is mighty has done great things for me, and holy is his name. Luke 1:46–49

Imagine what it must have been like to be a young teenage girl living in a culture where women had no voice, and where being unmarried and pregnant was a crime punishable by death. And yet she said YES. So be it.

There is little else seen of Mary. She is mentioned when Jesus is teaching as a boy in the temple (Luke 2:48). She is mentioned in passing a couple of other times, and is present at the crucifixion (John 19:25-27).

Mary’s life is a testimony and an example to our own life. She had a purpose from God. Her purpose was to bring God to this world in the flesh. But when the fullness of time had come, God sent forth his Son, born of woman, born under the law, Galatians 4:4

Mary’s purpose and our purpose is to be God’s servants and point the way to Jesus.

Whenever we are willing to trust God and say yes to Him, our lives take on new meaning and direction. If you want God to do the impossible in your life, you cannot allow fear to cloud your view of God and what He can do. Your trust must be greater than your doubt. When God invites you to do something for Him, don’t try to figure out how God will fulfil His purpose. The solution is God’s problem.

Many years before Abraham Lincoln was elected president, he was a store-keeper in Salem, Illinois. Abe had a rifle displayed in his store that was one of the most beautiful rifles ever made. The barrel was made from the finest steel, the stock from the best walnut wood; and a world-famous gunsmith had assembled the gun. The price was extremely reasonable. Displayed next to this attractive gun was a rack of ordinary Kentucky squirrel rifles. These long-barrel rifles were made from ordinary gun steel and plain wooden stocks. Yet, the price was higher.

A customer entered the store looking for a new rifle. He was impressed by the fine-looking gun but was confused as to why it was priced much lower than the less attractive rifles. Abe explained that the good-looking rifle was for show, while the others were for shooting. The pioneer bought the Kentucky squirrel rifle.

A little while later, a rich farmer was decorating a room in his country mansion. He wanted to place a gun over the fireplace mantle with his big game trophies. Abe’s fancy gun was exactly what he needed. The fact that it would not shoot was irrelevant. The purpose of the gun had changed.

We pray that we can all say “yes” when we are called by God for His purpose. Amen.