The Candle of Bethlehem 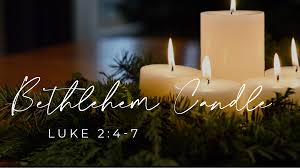 O Little Town of Bethlehem
O little town of Bethlehem, how still we see thee lie!
Above thy deep and dreamless sleep, the silent stars go by.
Yet in thy dark streets shineth the everlasting Light;
The hopes and fears of all the years are met in thee tonight.
For Christ is born of Mary, and gathered all above,
While mortals sleep, the angels keep their watch of wondering love.
O morning stars together, proclaim the holy birth,
And praises sing to God the King, and peace to men on earth!
O holy Child of Bethlehem, descend to us, we pray;
Cast out our sin, and enter in, be born in us today.
We hear the Christmas angels the great glad tidings tell;
O come to us, abide with us, our Lord Emmanuel!

The town of Bethlehem is the birth place of Jesus. Presently, it’s population is around 29,000 which is four times what it was in 1948 when Israel became a nation and probably fifteen times what it was when Jesus was born.

Now, King Herod, also known as Herod the Great, wasn’t perfect but he wasn’t entirely bad either. Herod was half Jew and half Gentile. He is known for humungous building projects throughout Judea, including his renovation of the Second Temple in Jerusalem and the expansion of the Temple Mount, the Tomb of the Patriarchs in Hebron, the construction of the port at Caesarea Martima, the fortress at Masada, and Herodium.

The title Herod the Great wasn’t simply an empty title, he kept peace in Palestine throughout his reign which was not an easy feat. In the year 12 BC he underwrote the cost of the Olympic games in Greece and was named the games “Perpetual President.”

And he wasn’t all bad as a politician. During the lean years he stopped collecting taxes. How’s that for an economic stimulus package? In 24 BC, he had his gold plates melted down to buy corn for the poor.

On the down side, he did have one tiny, little problem. Face it. We all have one problem or another, don’t we? Herod’s was that he kept killing people. Not just anyone. Just anyone he thought might be a threat to his position of power. He was insanely suspicious and paranoid. The older he got the more suspicious he got. He was referred to as a “Murderous Old Man.”

During his reign, he had his wife, Mariamne, executed along with her mother Alexandra, his eldest son Antipater, his middle son Alexander and his third son Aristobulus. Caesar Augustus stated at one point, “It is safer to be Herod’s pig then to be his son.”

When he was 70, he felt that he was near the end and he retired to Jerico and had some of the most notable and distinguished citizens of Jerusalem arrested on trumped up charges. On his orders, they were slaughtered at the moment of his death. Herod knew how people felt about him and he said that he was determined to have tears shed at his death. It worked.

And so, it was this man who was told about the one who would become King of the Jews. Matthew 2:1 After Jesus was born in Bethlehem in Judea, during the time of King Herod, Magi from the east came to Jerusalem 2 and asked, “Where is the one who has been born king of the Jews? We saw his star when it rose and have come to worship him.” 3 When King Herod heard this he was disturbed, and all Jerusalem with him.

12 And having been warned in a dream not to go back to Herod, they returned to their country by another route.

Matthew 2:16  When Herod realized that he had been outwitted by the Magi, he was furious, and he gave orders to kill all the boys in Bethlehem and its vicinity who were two years old and under, in accordance with the time he had learned from the Magi.

The only thing that saved Jesus was that an Angel visited Joseph. Matthew 2:13 When they had gone, an angel of the Lord appeared to Joseph in a dream. “Get up,” he said, “take the child and his mother and escape to Egypt. Stay there until I tell you, for Herod is going to search for the child to kill him.

During the second Sunday of Advent, we remember that God gave us His only Son, to live among us as a human, suffering as we do. And He loved us so much that he sacrificed His Son so that we may all have eternal life.

For God so loved the world that he gave his one and only Son, that whoever believes in him shall not perish but have eternal life. For God did not send his Son into the world to condemn the world, but to save the world through him. Whoever believes in him is not condemned (John 3:16-18). Today we thank you for your Son, our Savior, Jesus Christ, who is the light of the world. We who have sat in darkness have seen a great light, the light of Jesus Christ, our salvation.

The Candle of Bethlehem, the Love Candle, is a symbol of God’s love, that He sent His Son to live among us and die for our salvation.