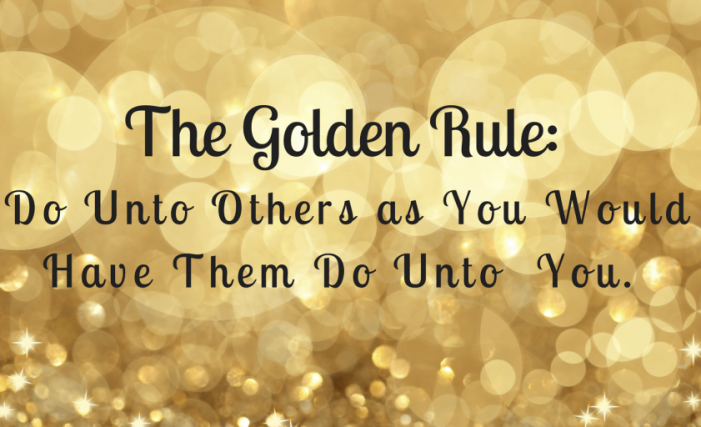 Matthew 7:12 So in everything, do to others what you would have them do to you.

The Golden rule is about putting yourself in someone else’s shoes. It’s thinking about what you would want someone to do for you if you were in their place.

I’ve heard people jokingly make substitute statements like “He who has the gold, rules” or “Do unto others before they do unto you.” The Golden Rule is commonly quoted in our culture.

The Golden Rule has always been popular. In fact, the reason it’s called the Golden Rule is because a Roman emperor, Alexander Severus, had this saying of Jesus engraved on his wall in gold. Marcus Aurelius Severus Alexander was Roman emperor from 222 to 235, and the last from the Severan dynasty. Alexander was the heir to his cousin, the 18-year-old Emperor Elagabalus, who had been murdered along with his mother Julia Soaemias, by his own guards, who, as a mark of contempt, had their remains cast into the Tiber river. I can see why Alexander was promoting the Golden Rule.

Chad was in 2nd grade. He was a little slower than the other children and that made them shun Chad. A couple of weeks before Valentines’ Day, Chad came home and told his mother that he wanted to make cards for everyone in his class. She knew how they treated her son, but she went and purchased the paper and glue and crayons. Night and day, Chad painstakingly made 35 valentines. Valentine’s Day came and Chad was beside himself with excitement. He carefully stacked them up, put them in a bag and ran out the door. His mother decided to bake him his favorite cookies and serve them up warm when he got home. She just knew that Chad would be disappointed. It hurt her to think that he worked so hard on all of those Valentines and he might not get any in return.

That afternoon when she heard the school bus, she looked out the window waiting for Chad. Sure enough, here they came laughing and having the best time. And as always, there was Chad in the rear. He was walking a little faster than usual. She fully expected him to burst through the door with tears because his arms were empty. When the doors opened, she choked back the tears. “Mommy has some warm cookies and milk for you Chad.” But he hardly heard her words. He just marched right on by and all he could say was; “Not a one…not a one.” Her heart began to sink until he said, with his face all aglow, “I didn’t forget a single person in my class mom. Not one.”

Chad’s focus was not on getting one but on not forgetting one. That’s what living out the Golden Rule looks like. It means when I give or help someone, I’m not looking for anything in return. It means I will live by this principle regardless if anyone else does.

Philippians 2:3-8. Do nothing out of selfish ambition or vain conceit. Rather, in humility value others above yourselves, 4 not looking to your own interests but each of you to the interests of the others.

5 In your relationships with one another, have the same mindset as Christ Jesus: 6 Who, being in very nature God, did not consider equality with God something to be used to his own advantage; 7 rather, he made himself nothing by taking the very nature of a servant, being made in human likeness. 8 And being found in appearance as a man, he humbled himself by becoming obedient to death—even death on a cross!

One of Grimm’s fairy tales tells of an old man who lived with his son, the son’s wife, and the young couple’s four-year-old boy. The old man’s eyes blinked, and his hands shook. When he ate, the silverware rattled against the plate, and he often missed his mouth. Then the food would dribble onto the tablecloth. This upset the young mother, because she didn’t want to have to deal with the extra mess and hassle of taking care of the old man. But he had nowhere else to live. So, the young parents decided to move him away from the table, into a corner, where he could sit on a stool and eat from a bowl. And so, he did. Always looking at the table and wanting to be with his family but having to sit alone in the corner. One day his hands trembled more than usual. He dropped his bowl and broke it. “If you are a pig,” they said, “then you must eat out of a trough.” So, they made the old man a wooden trough and put his meals in it.

Not long after, the couple came upon their four-year-old son playing with some scraps of wood. His father asked him what he was doing. The little boy looked up, smiled, and said, “I’m making a trough, to feed you and Mamma out of when I get big.” The next day the old man was back at the table eating with the family, from a plate, and no one ever scolded him or mistreated him again.

So we know the Golden Rule. But we may have a difficult time living it. It’s not so easy. We live in a selfish society which constantly tells us life is about you, your needs and desires. It’s our right. We deserve it.

Very rarely are we encouraged to think about others. And even when we try, it can be difficult. A man tells the story of taking his daughter’s car in to get repaired and he was discussing with the owner whether something was under warranty or not. So, he said, if this was your daughter and her car, what would you want me to say? The owner looked at him and said, if you were the owner of this dealership, what would you be saying about this? The Golden Rule cuts both ways and perhaps the hardest thing is to look at it from the other person’s perspective.

What would it be like to live the Golden Rule as a nation across the globe? What happens when we pursue policies that protect us but we don’t consider how it impacts the other nations around us? What if all of our national policies and decisions consider other’s needs first? The Golden Rule asks us as a nation to consider others, do to others as you would have them do to you. Do to others what will bless them. Sometimes to live the Golden Rule requires great moral courage. It requires a willingness to sacrifice.

In March of 1943, Bulgaria, which had aligned with the Nazis, received orders from Berlin that they were to begin implementing the Final Solution, the extermination of the Jewish people in Bulgaria and deport them to Treblinka. The King of Bulgaria and the Parliament did not want to fulfill this order but they passed it on nonetheless. The people of Bulgaria began to wonder what would happen to their Jewish neighbors and friends. Now the railroad cars were lined up hundreds long. The Jewish people in three towns were to be gathered at the local elementary school and then placed on the trains. Plodda was one of those towns. The Jewish people were told to bring only what they could carry. They were placed behind a chain link fence at the school and they knew what was going to happen. They began to cry out to their neighbors and tell them goodbye with tears streaming down their faces. Orthodox Bishop Curel comes to investigate this thing he had heard about. He cries out, “Children, the Christians of this country will not allow this to happen to you. I will not allow this to happen to you. I will lay my body on these tracks and they will have to run over my body. This will not happen to you.” He and the people of that town began to speak out. Others began to speak out. Several members of Parliament stood up and spoke but they were relieved of their offices and never served again in politics. But the people refused to let the trains leave.

Months later, the German Ambassador to Bulgaria on June 7, 1943 writes this back to Berlin: “I am firmly convinced that the Ambassador and the Parliament wish and strive for a radical final solution to the Jewish problem. However, they are hindered by the mentality of the Bulgarian people who lack the ideological enlightenment we have.” Instead they were enlightened by the teachings of Jesus who said, do to others as you would have them do to you. And because the Christians of Bulgaria stood up against this while 6 million Jews were killed, of the 49,000 Jews of Bulgaria, all were saved and not a single one of them was killed by the Nazis.

“A Prayer for Golden Rule Living” Father, You have placed Your children in a world where people push and shove to be first.  Because of their self-importance, they clamor for recognition and will stop at nothing until they get what they want in life, even if it means hurting others in the process.  But You’ve called us to view life from a perspective that considers others as important as ourselves.  We are to have a humble attitude that puts You first, others second, and ourselves last in everything we do.  In our humanity, this is impossible, but as we are being transformed into the likeness of Your Son, Jesus, we become more like Him.  Our love and consideration for others grows and we apply the golden rule to our lives where we do to others as we would have them do to us.   May this relationship rule guide us as we make decisions that affect others and ourselves.  Help us to have the mind of Christ in all that we do.  Amen.