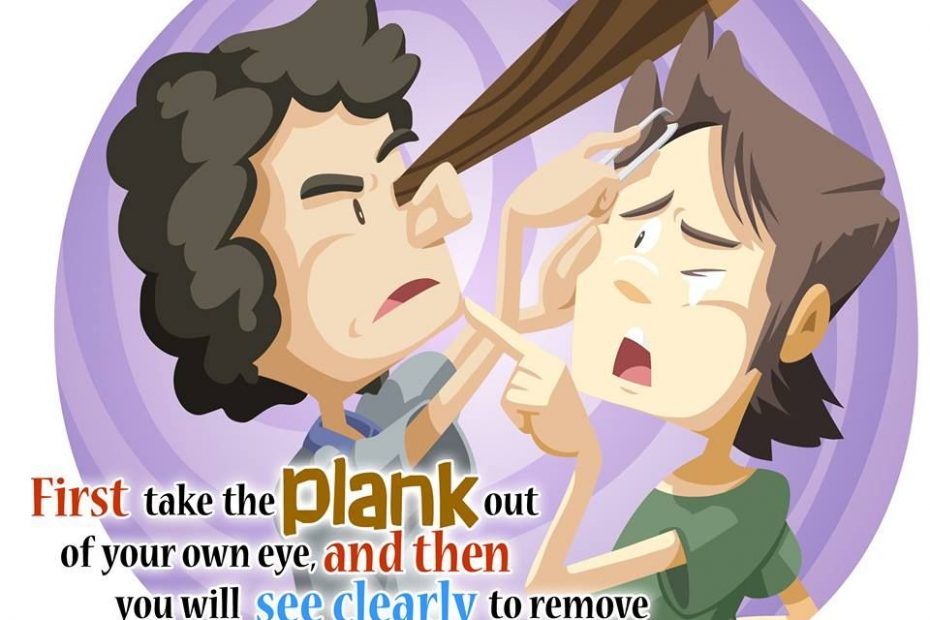 BEING A HYPOCRITE
Hypocrite. When you read the word, someone came to your mind. We are quick to judge who we think may be a hypocrite. The truth is, it is a disease that we ALL suffer from.
What is a Hypocrite? A hypocrite is an actor, a pretender. A hypocrite wants honor and attention. A hypocrite will tell you what to do but can’t take their own advice. Jesus spoke a lot in the Bible about hypocrites, warning his listeners against doing and saying things just to be seen by people. I don’t want to be a hypocrite, and I’m sure no one who truly loves the Lord wants to be one either. And we don’t have to be.

In judging others, Jesus said, “Judge not, that you be not judged. For with the judgment you pronounce you will be judged, and with the measure you use it will be measured to you. Why do you see the speck that is in your brother’s eye, but do not notice the log that is in your own eye? Or how can you say to your brother, ‘Let me take the speck out of your eye,’ when there is the log in your own eye? You hypocrite, first take the log out of your own eye, and then you will see clearly to take the speck out of your brother’s eye.” Matthew 7:1-5
Before you try to change or correct someone from his/her ‘wrong’ behaviors, deal with your own faults first. Hypocrites judge and criticize others. They are quick to point out others’ faults and flaws instead of focusing on their own. We need to remember we aren’t God and often are unable to judge with righteous judgment. Instead of judging others, we should ask the Lord to show us ourselves.
Jesus said, “So when you give to the poor, do not sound a trumpet before you, as the hypocrites do in the synagogues and in the streets, so that they may be honored by men. Truly I say to you, they have their reward in full.  But when you give to the needy, do not let your left hand know what your right hand is doing, 4 so that your giving may be in secret. Then your Father, who sees what is done in secret, will reward you.” Matthew 6:2-4
Jesus teaches us not to bring attention to ourselves when we give to those in need. We should do our good deeds in secret. When we perform good deeds in secret, God will bless us. Unfortunately, it’s human nature to want acknowledgment and attention from people. If we’re performing good deeds with the wrong intentions, we needn’t expect a further reward from God

When the scribes and Pharisees brought a woman who had been caught in adultery to Jesus, they expected Jesus to punish her according to the law of Moses. Instead, Jesus said, “…he who is without sin among you, let him be the first to throw a stone at her.” John 8:7
When we see someone caught in a sin, we should pray for them and remember, “Blessed are the merciful, for they shall receive mercy.” Matthew 5:7
“You blind Pharisee, first clean the inside of the cup and of the dish, so that the outside of it may become clean also.” Matthew 23:26
Hypocrites are more concerned with their outward appearance than they are with their hearts. Hypocrites try to look good in front of people.
If my people, who are called by my name, will humble themselves and pray and seek my face and turn from their wicked ways, then I will hear from heaven, and I will forgive their sin and will heal their land. 2 Chronicles 7:14 Humility allows you to recognize that you are not above anyone because you make mistakes like everyone else. This truth will help you avoid judging others.
Remember, actions speak louder than words.
Korean Air Lines flight KE007 was shot down by Soviet fighter-jets on September 1, 1983. On that fateful night, 240 unsuspecting passengers and crew members were shot down like an innocent sparrow in flight. The trigger-man for the Soviet Union was Major Osipovich, a pilot who wasn’t originally scheduled to be in the air during this international travesty.
The Major was slated to give a talk about peace at his daughter’s school so he volunteered for night duty to free up enough time to speak during school hours. This adjustment in flight time put him in the position of patrolling the eastern skies when that Korean passenger-jet strayed into Soviet air space. In the end, Major Osipovich followed orders and shot down the commercial airliner. How tragic that 240 lives were lost, and world powers were pushed dangerously close to catastrophic results because military missiles were fired at a civilian airplane by a pilot who was preparing to teach children about peace. Character can only be supported by actions, not merely words.
Father forgive us for being hypocrites. God, we want to honor you with every word that comes from our mouth and every action we take throughout the day. Give us humility to see how far from perfect we are. Help us to realize when we’re being judgmental of others. Your word says that “at whatever point you judge another, you are condemning yourself” Romans 2:1. God, replace the judgmental spirit in all of us with your agape love. Thank you, Jesus. Amen
YOU NEVER KNOW – Helen Lowrie Marshall
You never know when someone May catch a dream from you. You never know when a little word Or something you may do May open up the windows Of a mind that seeks the light – The way you live may not matter at all, But you never know – it might.
And just in case it could be That another’s life, through you, Might possibly change for the better With a broader and brighter view, It seems it might be worth a try At pointing a way to the right – Of course, it may not matter at all, But then again – it might.