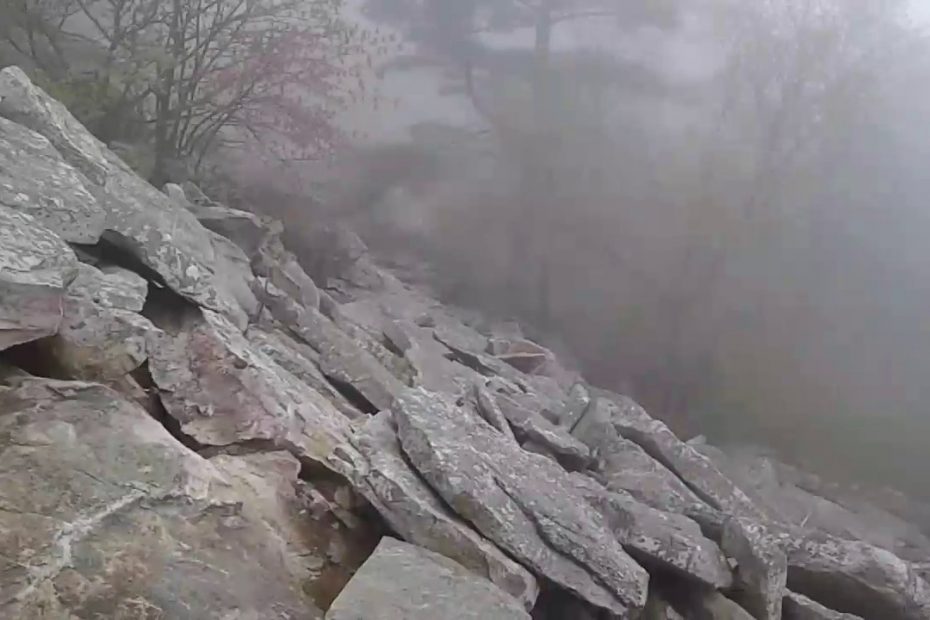 I hiked a part of the Appalachian Trail in Pennsylvania called the “Knife edge”. There are lots and lots of rock boulders on the ridge line tossed in piles or sheets of rock pressed up against each other. It is around a four mile stretch of woods and rocks. Many, many rocks.

It’s called the knife edge because at times you find yourself placing one foot on each side of two rock faces that meet pointing up to the sky. I can’t say how far you would fall if you lost your footing because I wasn’t looking anywhere except where I was stepping. The path, I needed to stay on to successfully and safely reach my goal of getting to the other side through all those challenges, was narrow.

It’s a good thing to know where you’re going. There are many things pressing in on us telling us where we should be going. Especially in this age of electronic navigation. The thing is, electronic navigation lies. I argued with a guy several times that he was taking the wrong route from Binghamton to Enfield. His navigator directed him to go to Cortland first from Binghamton and then come to Enfield. I said the route was longer that way. He said the navigator didn’t lie. How can you argue with a non-entity computer program? First, you can’t win the argument and second people look at you as if you’re insane.

Then there was the time my husband and I were driving back home from Cleveland after visiting my brother Alan. I was the navigator. Dave was driving so I closed my eyes to take a short nap after letting him know to just stay on I-90 East. When I opened my eyes again, I was looking at a Ralston Purina Dog Food factory on a side street in Akron Ohio, 45 miles South of Cleveland. It was a long trip home because I chose to close my eyes.

Life is filled with choices. Each day we’re confronted with choices. Psychology Today claimed in an article, published in 2018, that the average person makes a staggering 35,000 decisions a day. That sounds like a lot. But then again, there is no arguing that we do make many decisions throughout the day.

Some have little impact, while others significantly change the course of our lives. We’re all accustomed to making choices every day, and not just a few choices, but a supermarket full of them, each with their own special ingredients.

Take toothpaste for instance. Years ago, it used to be a choice between buying Crest and Colgate. Now there over 15 major manufacturers with each making multiple types. Now it’s extra whitening, tartar control, complete care, baking soda, gel, paste, gel and paste combined, antibacterial, flavored, toothpaste for sensitive teeth, and then there are the different sizes and shapes of the containers. And that’s just Crest.

And so, let’s take a moment and look at both of these ways so we can determine which path we’re on.

This path Jesus is referring to is wide because it accommodates the masses. It’s also wide so that we can carry as much baggage and goodies as we want. It’s a wide path because it allows us to keep all the junk from the past without having to deal with it. It’s wide so that people who travel upon it aren’t inconvenienced along the way. That’s why there are a lot of lanes that people can travel upon. There’s the Substance Abuse lane, the Pride lane, the lane of Materialism, the lane of Hate and Anger, the lane of Bitterness, the lane of Unforgiveness. We can expand the number of lanes as we need them.

And while there are many lanes, and while it is easy to travel upon them, Solomon, the wisest of all men, tells us that all these lanes have just one ending.

Now, the obvious question is why is this path more widely accepted and traveled? The answer is because it’s a way that has no rules or restraints. It’s a way where everyone can do what is right in their own sight. What is right for me. What I want to do with my freedom to choose. The wide way allows you to believe and do anything you want. It’s a road that has no curbs, no restrictions, and no warning signs.

Senator James A. Reed of Missouri said, “The majority crucified Jesus Christ; the majority burned the Christians at the stake; the majority established slavery; the majority jeered when Columbus said the world was round. Don’t be deceived by the loud voice of majority morality.”

Christ always calls us to follow a different lifestyle. The wide way is not only the path most people are on, but also it is the path that most people will encourage you to take, and if you choose not to, then they’ll ridicule and hate you. The majority isn’t always right, however. Even if 99 percent of people tell you this is the way, and the Bible says differently, then God and His word is the way to go.

The majority chooses the wide way, because they don’t have to give up anything, and that belief structure is that all someone needs to be is good enough to get to heaven, or that all religions are pathways to God.

This way of the world is lit with some pretty bright lights that blind people from the truth.

The narrow way must be watched for. When I am hiking the Trail, I need to focus and carefully watch for the trail markers. The Appalachian Trail is marked with a small white blaze. It is always white. It can be on a tree, a rock, a sign post or whatever. But it is always white. If you lose your focus and get distracted by the rocks or brush or the view, you can lose your way. Sometimes, I will look up and not see a white mark even after hiking for a few hundred yards. At that point, I retrace the path I was following until I see the white mark again. It is easy to lose the right path. Leaving the right way can be fatal in rough mountainous terrain.

It isn’t always easy following the narrow way. It’s hard to turn the other cheek when someone does us wrong. It’s hard to love those who hate our guts. And it’s not easy to forgive others over the wrong that they have done.

Jesus said, “I am the way, the truth, and the life. No one comes to the Father except through Me.” John 14:6

Jesus is the narrow gate, and the narrow way, and whoever travels down this road will be saved.

Life is all about choices, and we all have the freedom to choose. “I call heaven and earth as witnesses today against you, that I have set before you, life and death, blessing and cursing; therefore choose life, that both you and your descendants may live.” Deuteronomy 30:19