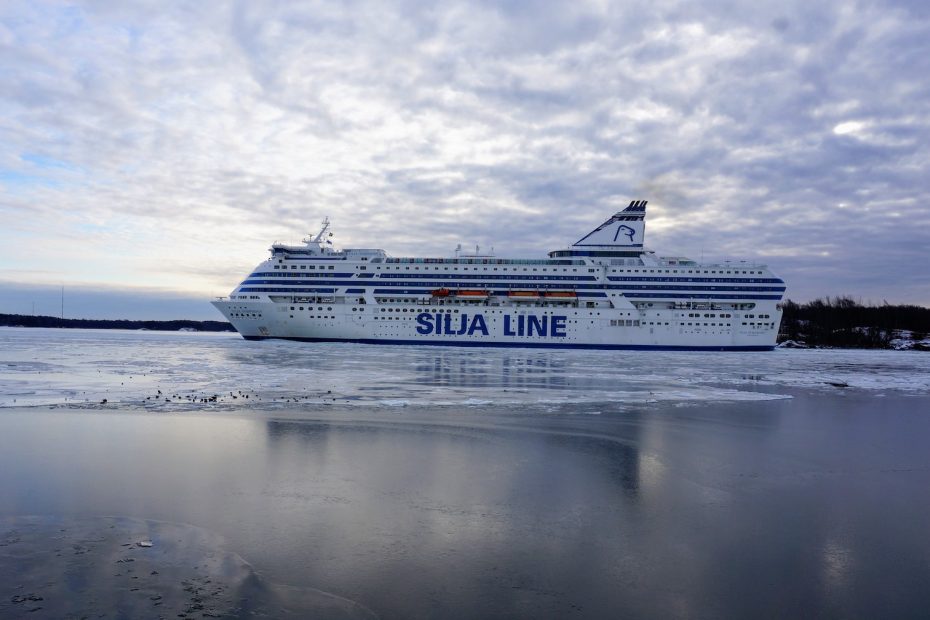 My Grandfather, Gus, came to the United States in 1895 at the age of 18. He immigrated from an Island called Gotland, located in the Baltic Sea, 50 miles off the coast of Sweden. It is about 100 miles long and 30 miles wide.

My cousin, Elsie, invited me to come for a visit. Seeing where my Grandfather was born was intriguing so I accepted her invite. My daughters, Laura and Mary, joined me. Elsie met up with us at the Stockholm Arlanda Airport. After a brief tour of the capitol city, we headed for the docks to catch a ferry to Gotland.

It was nightfall when we settled on the ship ready to head to Visby, the largest city on Gotland. I had no idea how long the night was going to become. Even though the ferry was huge, it was hard to walk on the ship. The Baltic Sea is NOT calm. Every time I took a step my foot would land feet away from where I had aimed it. It was quite disconcerting.

Shortly after taking our seats the ship departed. Elsie spoke some English. I spoke no Swedish. Communication was limited. So, I didn’t realize that we were on a ferry that would take all night to get to Gotland. After a bit, Elsie got up out of her sit and curled up on the floor in the aisle. Elsie was 80 years old. It didn’t seem right to me. She was asleep in no time. I wasn’t. My daughters drifted in and out of sleep in their chairs. I didn’t. I was on watch.

The night wore on. I got up from time to time and began to feel more adapted to walking around a bit but didn’t go far from my sleeping family. It was a very different experience for me. It started to grow on me. Here I was, getting used to the ships movements from the huge swells in the Baltic Sea, travelling to Gotland through the night.

I began to feel a sense of anticipation. Looking out over the dark water, I searched for signs of approaching land. Finally, long into the night, I thought I saw a light. It could be another ship. I watched it for a while. Then I saw another light and another until there was a line of lights ahead of us. The Visby Harbor.

It is hard to describe what I was feeling. I realized that this would have been the last thing my Grandfather would have seen as he left his homeland at the age of 18. He had never returned. He had said goodbye to his parents and family and left everything he knew for a new life.

100 years later, I, his granddaughter, and two great granddaughters, were returning to his homeland to walk on the same ground he had. To see the same cobblestone city streets that have existed for over 1,000 years. To see the farmlands, the churches and homes that I can only describe as medieval in appearance.

I travelled to the rural town of Alva in southern Gotland where he was born.

The Alva Church that he and the family attended had been built in the 1200’s. It is very Romanesque. To the side of the church and behind it was the church cemetery. There were two large very old grave stones in front of the rest which I walked up to. I read the names Joann and Johanna Boberg. They were the graves of my great grandparents.

Alva is a very small rural town. The streets are hardened dirt. I had a picture my Grandfather had brought with him when he had left in 1895 of his parents standing in front of their home. Searching for the house, I found that all the homes looked virtually identical. A family stepped out of their home to speak to me. They knew no English. I knew no Swedish but I did know a name. I said, August Boberg, my Grandfathers name.

They nodded and encouraged us to come into their home. They invited us to share a meal with them. Very traditional Swedish. Porridge and sliced cucumbers, tomatoes, and cheese. It was wonderful.

A relative arrived who knew some English. He directed us to a neighboring home which had a woodshop attached. There the homeowner took us to his shop. He took down an embroidered framed picture and showed me the names preserved in yarn. It was a list of all the young men and women who had left Alva in 1895 to travel to the United States to make a new life. He pointed to the name August Boberg.

It was coming home to a place I had always been a part of but where physically I had never set foot.

Someday, we will all be coming home, to our forever home.

Let me remind you what that will be like.

John 14:1 “Do not let your hearts be troubled. You believe in God; believe also in me. 2 My Father’s house has many rooms; if that were not so, would I have told you that I am going there to prepare a place for you? 3 And if I go and prepare a place for you, I will come back and take you to be with me that you also may be where I am. 4 You know the way to the place where I am going.”

You get a new body. Our heavenly bodies will be an upgrade. Bodies that won’t get tired, feel pain, get sick, sag, fall apart or get old.

Jesus promised, we’ll get a custom-built dwelling place. Whatever you call home down here will be nothing compared to our abodes that Jesus says He is preparing for us right now.

Won’t it be great to know your spouse and kids and parents when they’re perfect?

We’ll get to live in a perfect world. What a great place the New Earth and the New Jerusalem will be. Revelations 21 and 22. Eden is restored

22 Then the angel showed me the river of the water of life, as clear as crystal, flowing from the throne of God and of the Lamb 2 down the middle of the great street of the city. On each side of the river stood the tree of life, bearing twelve crops of fruit, yielding its fruit every month. And the leaves of the tree are for the healing of the nations. 3 No longer will there be any curse. The throne of God and of the Lamb will be in the city, and his servants will serve him. 4 They will see his face, and his name will be on their foreheads. 5 There will be no more night. They will not need the light of a lamp or the light of the sun, for the Lord God will give them light. And they will reign for ever and ever.

John says there’ll be no need for a temple, for God will be there. Nor will there be a need for the sun, for God’s glory will provide all the light necessary. And there’ll no more night or darkness. And through the city will flow the River of Life as clear as crystal. It will be a perfect place to live: Paradise will be restored. Creation, which has suffered because of the Fall, will be restored.

When you and I get to heaven, there are going to be some awesome “no-mores”. No more hunger, no more thirst, no more scorching heat, no more tears, no more death, no more crying, no more pain, no more evil.

I know I’ll never be perfect, but I still get tired of failing. No longer having that struggle to choose to do or say the right thing will be fantastic.

We’ll get to see Jesus.

When we all get to heaven,
What a day of rejoicing that will be!
When we all see Jesus,
We’ll sing and shout the victory!