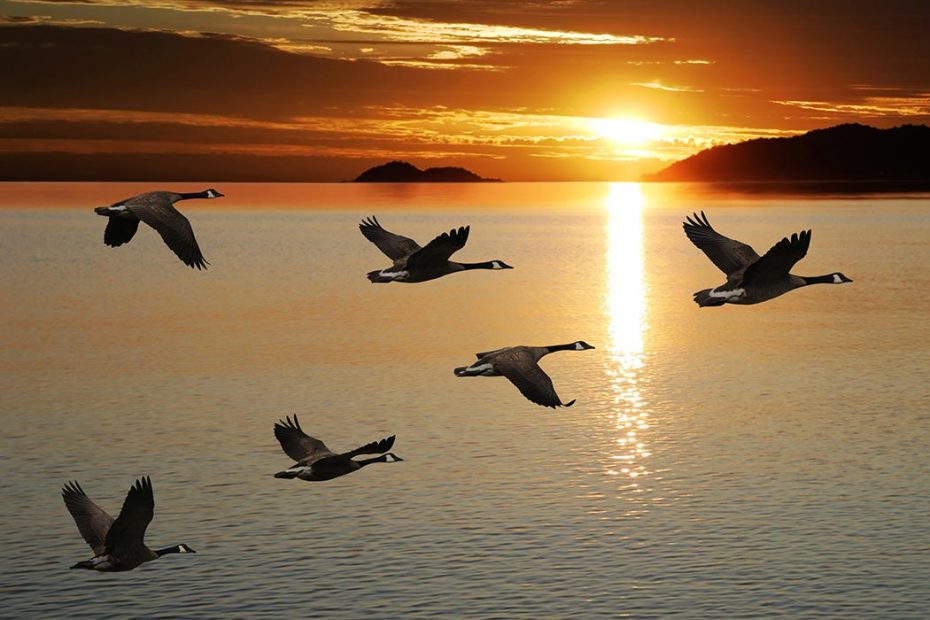 Romans 15:2 Each one of us needs to look after the good of the people around us, asking ourselves, “How can I help?”

Every fall we watch thousands of geese fly south in a distinctive V-shaped flying pattern. It’s fun to watch them switch off the lead position as they trail along in formation. There is always a lot of honking as they pass over head.

Wildlife scientists have conducted studies to determine why geese and other migratory birds always fly in a V-formation. We may not fly like the geese but the principals apply just the same in our walk.

When geese fly together, each goose provides additional lift and reduces air resistance for the goose flying behind it.  Consequently, by flying together in a V-formation, scientists estimate that the whole flock can fly about 70% farther with the same amount of energy than if each goose flew alone.  Each bird flies slightly higher above the bird that is in front of him resulting in a reduction of the wind resistance. As the bird flaps, the air rolls off the wing tip and creates a downwash and the air behind it pushes upward.

If you observe the flight pattern, almost always one side of the V is longer then the V-formation. When the lead bird tires, it rotates to the back of the formation. Everyone has an opportunity to serve as a leader and a follower. Romans 12:5 states: “So in Christ we who are many form one body, and each member belongs to all the others. I need you and you need me.

If a goose falls out of position in the V-formation it suddenly feels the drag and resistance and the goose will quickly return to the proper formation. When people work together harmoniously, together we make it work and get the job done. We lift each other up by our energy and enthusiasm. Amos 3:3 Do two people walk hand in hand if they aren’t going to the same direction?

As they fly overhead, geese make a lot of noise. They honk at each other. Scientists speculate that this honking is their way of communicating with each other during their long flight. When working with others, it is exceedingly important to communicate regularly. Hebrews 3:13a: “But encourage one another daily. Proverbs 27:17: “As iron sharpens iron, so one man sharpens another.”

Encouragement can be more than a few words. You can encourage someone with an act of kindness, a kind word, a smile, a pat on the back, a prayer, a card, email.

In the summer of 2002, nine miners were trapped for three days in a water-filled mine shaft in Pennsylvania. After their amazing rescue, the miners said that they “decided early on they were either going to live or die as a group.” The 55-degree water threatened to kill them slowly by hypothermia. According to a news report, they came up with a plan: “When one would get cold, the other eight would huddle around the person and warm that person, and when another person got cold, the favor was returned.”

“Everybody had strong moments,” miner Harry B. Mayhugh told reporters after being released from the hospital. “But any certain time maybe one guy got down, and then the rest pulled together. And then that guy would get back up, and maybe someone else would feel a little weaker, but it was a team effort. That’s the only way it could have been.”

Geese help each other. Scientists also discovered that when one goose becomes ill, is shot or injured, and drops out of the formation, two other geese will fall out of formation and remain with the weakened goose.  They will stay with and protect the injured goose from predators until it is able to fly again or dies.

In May, 1953, two men became the first in history to climb to the top of Mt. Everest; Edmund Hillary, a New Zealand beekeeper and explorer, and his Sherpa guide from Nepal, Tenzing Norgay. They reached the summit together and attained instant international fame. On the way down from the 29,000-foot peak, Hillary slipped and started to fall. He would almost certainly have fallen to his death, but Tenzing Norgay immediately dug in his ice-axe and braced the rope linking them together, saving Hillary’s life.

At the bottom the international press made a huge fuss over the Sherpa guide’s heroic action. Through it all Tenzing Norgay remained very calm, very professional, very uncarried away by it all. To all the shouted questions he had one simple answer: “Mountain climbers always help each other.”

Ecclesiastes 4:9-12: Two are better than one, because they have a good reward for their labor. For if they fall, one will lift up his companion. But woe to him who is alone when he falls, for he has no one to help him up. Again, if two lie down together, they will keep warm; but how can one be warm alone? Though one may be overpowered by another, two can withstand him.

My Grandfather, August William Boberg, left the small town of Alva, located on the Island of Gotland in the Baltic Sea off the coast of Sweden, when he was 17 years old. When the ship landed on the US mainland, he made his way out to the wild west in the early 1900’s.

My Grandmother, Mary Laura McVeigh, was born on a horse ranch on the plains of the Midwest. They met just outside Denver, Colorado and, after courting for some time, were married. Ten years later, my Mother was born. When she was one year old, they packed up their belongings and travelled by train and moved to the Town of Enfield in 1920. My Grandfather wanted to get back to where it was green and my Grandma was game for the adventure.

Twenty years ago, I took a trip to Gotland and visited the town my Grandfather was born in. Located in the Baltic Sea is a small island, 109 miles by 32 miles in size. It very much resembles Tompkins County.

My Grandparents did good. I am grateful they chose Enfield. My parents raised me on the same plot of land they chose as their home and my husband and I raised our kids on it. I get to help raise my grandkids on the same hillside.

I love our community. Although I enjoy travelling around this great country, I will always return, God willing.

As we watch the geese fly over our heads, remember that we are in it together. Even as we lead our separate lives, together we are better. We make it work and get the job done.