The Truth, The Whole Truth, and Nothing but the Truth 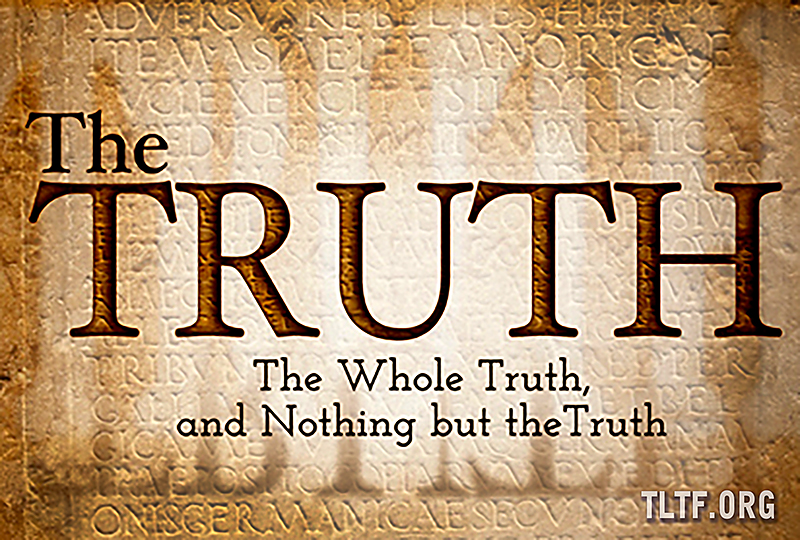 Once, when a stubborn disputer was trying to convince Abe Lincoln that his view of events was the truth because he was unconvinced that Abraham Lincoln was right about something, Lincoln said, “Well, let’s see, how many legs has a cow?” “Four, of course,” came the reply disgustedly.

“That’s right,” agreed Lincoln. “Now suppose you call the cow’s tail a leg; how many legs would the cow have?” “Why, five, of course,” was the confident reply. “Now, that’s where you’re wrong,” said Lincoln. “Calling a cow’s tail a leg doesn’t make it a leg.”

That’s a great illustration for the mindset of some people today. They’re convinced that just because they call something truth that must be what it is when, in reality, calling it something else doesn’t make it true and doesn’t change the lie that it is.

A professor at a college in Ohio puts it this way: We want to prepare students on how to think, not tell them what to think. Truth is something you discover in your own mind. There are no facts, no absolutes, no rights or wrongs, it is up to them to come up with their own truth.

It’s even being taught in our grade schools. In an article in the New York Times a guidance counselor had this to say about how he interacts with the students. “I may agree or disagree with them on the inside, but I never force my values on them. If I come from the position of what is right or wrong, then I’m not being their counselor.

One of the best-known statements from our Declaration of Independence states that our declaration is based on truth. “We hold these truths to be self-evident, that all men are created equal, that they are endowed by their Creator with certain unalienable Rights, that among these are Life, Liberty and the Pursuit of Happiness.”

Is truth self-evident? Is what we know true? How do we know what truth is? Philosophy has some ideas about what truth is. I studied Philosophy in college. Frankly, I found Philosophy to be a study of confusion. It is a process of looking at questions but not finding answers, just more questions.

For example, a philosopher could ask,” If you look at an apple, you might say it is red. Someone who is color blind might be equally certain it is green. Both of you would be expressing what your eyes told you. But the truth may be something else entirely. We are actually calling the item by the colors that are reflected off of the item, not the colors that are absorbed by the item. Wouldn’t the true color of an item be the very opposite of the one we see? Good grief!

I remember another annoying question the professor asked the class. “If a tree falls in a forest and no one is around to hear it, does it make a sound?” My response was, “Of course, it makes a sound.” The professor asked me, “How do you know?” I just shook my head. I was thinking, “Why would I bother my brain cells with a question like that?” I ended up with a D in the course and considered that D a generous grade. Philosophy is not my cup of tea. Philosophers can’t agree, even on how we describe and identify the truth about the objects around us.

Colossians 2:8 See to it that no one takes you captive through hollow and deceptive philosophy, which depends on human tradition and the basic principles of this world rather than on Christ.

Then I thought about all the polls that are taken searching for the truth, particularly dealing with politics or people’s thinking about current issues. Unless you live in a world without television or news, you know that there are multiple sources of polls and information gatherers looking for the truth. There are problems with this. The way people answer depends upon certain things. It depends upon who is asking the question. It depends upon how the question is asked. It is nearly impossible for a poll of any kind to be completely unbiased.

The fact that they reach people through the phone means they are only reaching a small group of people who are willing to answer questions from strangers on the phone. Today, a significant number of people don’t even answer the phone if they don’t know who is calling. Polls can’t give us the truth.

A Peanuts cartoon pictured Lucy and Linus looking out the window at a steady downpour of rain. “Boy,” said Lucy, “look at it rain. What if it floods the whole world?” “It will never do that,” Linus replied confidently. “In the ninth chapter of Genesis, God promised Noah that would never happen again, and the sign of the promise is the rainbow.” “You’ve taken a great load off my mind,” said Lucy with a relieved smile. “Sound theology,” pontificated Linus, “has a way of doing that.”

The Bible tells us and I believe the following. God is our creator and truth exists as God created it to be. Without God, there is no truth. When we talk about truths that are self-evident, as described in the Declaration of Independence, we are talking about God given truths. It is impossible to describe truth without that concept. Truth means nothing apart from God. It cannot be explained without God. Since God alone is the creator of all things, God alone is the creator of all truth. If a truth is self-evident, the truth exists always.

The whole concept of truth falls apart as soon as you remove the concept of God from the center. Without a source at the center, all of us will simply define truth based on what we want which is what we see a lot of today. Truth becomes “our truth,” not something for everyone. What I see as true is “my truth.” What you see as true is “your truth.” There can be no universal truth unless there is a universal creator at the center. Without this source of rightness, all is chaos.

We hold these truths to be self-evident. That they are endowed by a  creator … Jesus talks about belief in the Truth in John 8:42-47  42 Jesus said to them, “If God were your Father, you would love me, for I have come here from God. I have not come on my own; God sent me. 43 Why is my language not clear to you? Because you are unable to hear what I say. 44 You belong to your father, the devil, and you want to carry out your father’s desires. He was a murderer from the beginning, not holding to the truth, for there is no truth in him. When he lies, he speaks his native language, for he is a liar and the father of lies. 45 Yet because I tell the truth, you do not believe me! 46 Can any of you prove me guilty of sin? If I am telling the truth, why don’t you believe me? 47 Whoever belongs to God hears what God says. The reason you do not hear is that you do not belong to God.”

Jesus says there is no middle ground. Either you believe God or you have bought the lie of Satan. There is no such thing as neutrality. Everything good and right and True is bound up in the person of Christ and anything that is against that belongs to Satan.

I don’t believe that there is a demon lurking behind every poor decision. Much of the evil in the world can be chalked up to our sinful human nature and to the stupidity of some people. On the other hand, one of the lies Satan would love to convince you of is that he doesn’t exist because if you buy that, you aren’t prepared to defend yourself from the attacks when they come.

Ephesians 6:12 tells us: For our struggle is not against flesh and blood, but against the rulers, against the authorities, against the powers of this dark world and against the spiritual forces of evil in the heavenly realms. Satan is a liar, so his first goal is to confuse us. John 8:44 When he lies, he speaks his native language, for he is a liar and the father of lies. Satan loves to come so close to the truth but twist it just slightly to make it more attractive and to give it the sense that its right. 1 Peter 5:8 Be alert and of sober mind. Your enemy the devil prowls around like a roaring lion looking for someone to devour.

Satan will attack when he thinks he can win, when we are weak we need to be on guard and clinging to the Truth that tells us that if we resist he will flee and if we ask for wisdom and strength to get through it, God will give it to us. So, be encouraged because we serve a God who holds the power. We serve a God who gives us the Truth to follow and to share with others.

Jesus said in John 8:31-32, “If you hold to my teaching, you are really my disciples. 32 Then you will know the truth, and the truth will set you free.” John 14:6 Jesus answered, “I am the way and the truth and the life. No one comes to the Father except through me.

The Truth is that Scripture is true regardless of if I believe it or not. Because it is the word of God and the standard of absolute truth for all men. If a society that has created their own rules, wants to call that thinking judgmental, bigoted, and narrow-minded, let them, it doesn’t change the Truth. The Gospel of Jesus Christ is the absolute truth, for all men, for all times, in all cultures, and in every situation!

John 1:14. The Word became flesh and made his dwelling among us. We have seen his glory, the glory of the One and Only, who came from the Father, full of grace and truth.

John 3:16  “For God so loved the world that he gave his one and only Son, that whoever believes in him shall not perish but have eternal life.