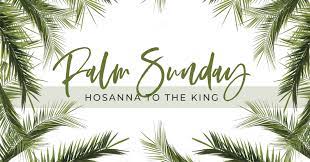 The ones that shouted ‘yasha anna’ will be shouting, “Crucify Him” in just four days.
Let the palms wave on this most happy day!
Greetings they bear to us of joy and gladness.
Jesus is come to take all grief away,
He comes to banish gloom and sadness.

Chorus:
People and tongues shall chant His praise;
Tune every voice, His name be gladly singing.
Hosanna! Glory to God!
Glory to Him who comes bringing salvation.

2 His gentle voice pervades the mighty throng.
’Tis He who freedom gives o’er land and sea;
’Tis He who gives in darkest night a song,
Gives light, O Lord, that we may come to Thee!

3 Rejoice, rejoice, Jerusalem the holy!
Loud let thy joyous notes in praise ascending.
Laud Him, the Child of Bethlehem the lowly,
All hearts aflame, in song all voices blending.