Are Animals In Heaven? 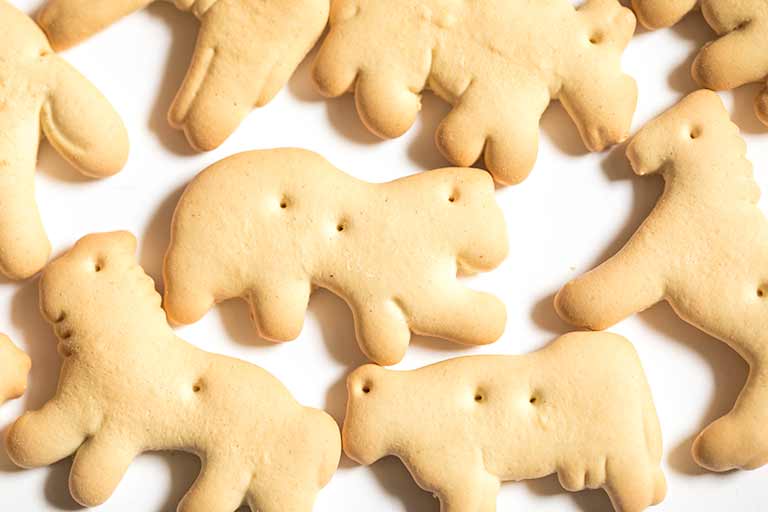 In case you didn’t know, today, April 18th, is the animal cracker birthday in the United States.
When I was placing my grocery order, I added some animal crackers since I hadn’t had some in a while and was feeling a hankering for some. I like the original Barnum Circus ones in the circus box, of course. My parents used to buy me and my brother a box as a reward or a treat or sometimes just to keep us quiet for a while on a long car ride.
For those who might not be a familiar with them, an animal cracker is a particular type of small cracker baked in the shape of an animal, usually an animal found at either a zoo or circus, such as a lion, a tiger, a bear, or an elephant. Although animal crackers tend to be sweet in flavor like cookies, they are made with a layered dough like crackers and are thus marketed as crackers and not as cookies.
Barnum’s Animals Crackers are all produced in the Fair Lawn, New Jersey, bakery by Nabisco Brands. More than 40 million packages of Barnum’s Animals Crackers are sold each year. The cookies are baked in a 300-foot long traveling band oven. They are in the oven for about four minutes and are baked at the rate of 12,000 per minute. About 15,000 cartons and 330,000 cookies are produced in a single shift.
It’s hard to imagine our world without animals. Almost everyone has had a beloved pet. Some consider their pets as their own children.  A pet’s love is so very often completely unconditional.  They don’t care what your day was like, what went wrong at work, what your mood is when you come home.  They are always ready to jump up into your lap and are so full of joy at seeing you that they display this love in their actions.

Have you ever wondered, so, what happens to pets after they die?  Are animals in heaven?
What does the Bible say about animals?
When Adam was created, God surrounded him with animals.
24 And God said, “Let the land produce living creatures according to their kinds: the livestock, the creatures that move along the ground, and the wild animals, each according to its kind.” And it was so. 25 God made the wild animals according to their kinds, the livestock according to their kinds, and all the creatures that move along the ground according to their kinds. And God saw that it was good.
26 Then God said, “Let us make mankind in our image, in our likeness, so that they may rule over the fish in the sea and the birds in the sky, over the livestock and all the wild animals, and over all the creatures that move along the ground.”
When Noah was delivered from the flood on the ark, God surrounded him with animals. Genesis 9:9-10 “I now establish my covenant with you and with your descendants after you and with every living creature that was with you—the birds, the livestock and all the wild animals, all those that came out of the ark with you—every living creature on earth.”
Genesis 9:16 “Whenever the rainbow appears in the clouds, I will see it and remember the everlasting covenant between God and all living creatures of every kind on the earth.”
When Jesus was born, God surrounded Him with animals. Luke 2: 6 While they were there, the time came for the baby to be born, 7 and she gave birth to her firstborn, a son. She wrapped him in cloths and placed him in a manger, because there was no guest room available for them.
Isaiah 11:6-10 There will be animals on this earth during the thousand years reign of Christ and there will be animals in the new heavens and on the new earth. “The wolf shall lay with the lamp, the leopard will lie down with the goat, the calf and the lion and the yearling together; and a little child shall lead them. The cow shall feed with the bear; their young will lie down together, and the lion will eat straw like the ox. The infant will play near the cobra’s den, the young child shall put its hand into the viper’s nest. They will neither harm nor destroy on all My holy mountain, for the earth shall be filled with the knowledge of the Lord…”
The word animal comes from the word anima which means “soul.” 1 Corinthians 15 39 Not all flesh is the same: People have one kind of flesh, animals have another, birds another and fish another. 40 There are also heavenly bodies and there are earthly bodies; but the splendor of the heavenly bodies is one kind, and the splendor of the earthly bodies is another. 41 The sun has one kind of splendor, the moon another and the stars another; and star differs from star in splendor.
42 So will it be with the resurrection of the dead. The body that is sown is perishable, it is raised imperishable; 43 it is sown in dishonor, it is raised in glory; it is sown in weakness, it is raised in power; 44 it is sown a natural body, it is raised a spiritual body. If there is a natural body, there is also a spiritual body.
No longer riding on the foal of a donkey (Matthew 21:1-7), but a white horse, Jesus comes to finally vanquish all evil. Revelation 19:11 I saw heaven standing open and there before me was a white horse, whose rider is called Faithful and True. With justice he judges and wages war.
Animals are God’s creatures. He has always been concerned for their care.  Psalm 50:10-11 for every animal of the forest is mine, and the cattle on a thousand hills. 11 I know every bird in the mountains, and the insects in the fields are mine.
Animals are capable of praising God. Psalm 148:7-10 Praise the Lord from the earth, you great sea creatures and all ocean depths, 8 lightning and hail, snow and clouds, stormy winds that do his bidding, 9 you mountains and all hills, fruit trees and all cedars, 10 wild animals and all cattle, small creatures and flying birds,
All go to the same place. All came from the dust and all return to the dust. Ecclesiastes 3:18-21: “As for humans, God tests them so that they may see that they are like the animals.  Surely the fate of human beings is like that of the animals; the same fate awaits them both: As one dies, so dies the other. All have the same breath (literally “spirit“); humans have no advantage over animals. Everything is meaningless. All go to the same place; all come from dust, and to dust all return. Who knows if the human spirit rises upward and if the spirit of the animal goes down into the earth?”

Hosea 2:18 “In that day I will make a covenant for them with the beasts of the field, the birds in the sky and the creatures that move along the ground. Bow and sword and battle will abolish from the land, so that all may lie down in safety.”

As Billy Graham put it, “Animals are fascinating creatures, and the variety seems endless. We know that God gave them to us for a purpose, because in the days of Noah, before the great flood, God preserved every species—male and female—on the ark so they would inhabit the land again. Animals are among God’s many diverse gifts to man. Who doesn’t smile while watching chimpanzees mimic one another, or marvel at the monstrous whales in the ocean, or be inspired to watch swans gracefully move through the waters?
We boast of man’s best friend because a faithful dog will protect its owner. Fish are a source of food, and we love to envision Jesus riding the colt of a donkey into Jerusalem—and we wait breathlessly for His appearance on a white horse from Heaven.
Scripture speaks of the future messianic kingdom that captivates our imaginations: “The wolf will live with the lamb, the leopard will lie down with the goat, the calf and the lion and the yearling together; and a little child will lead them. One day perfect peace will reign, and everything that has breath, including animals, will praise the Lord.”
Psalm 150 Praise the Lord.
Praise God in his sanctuary; praise him in his mighty heavens.
2 Praise him for his acts of power; praise him for his surpassing greatness. 3 Praise him with the sounding of the trumpet, praise him with the harp and lyre,4 praise him with timbrel and dancing, praise him with the strings and pipe, 5 praise him with the clash of cymbals,
praise him with resounding cymbals. 6 Let everything that has breath praise the Lord. Praise the Lord.

So, are there animals in heaven?