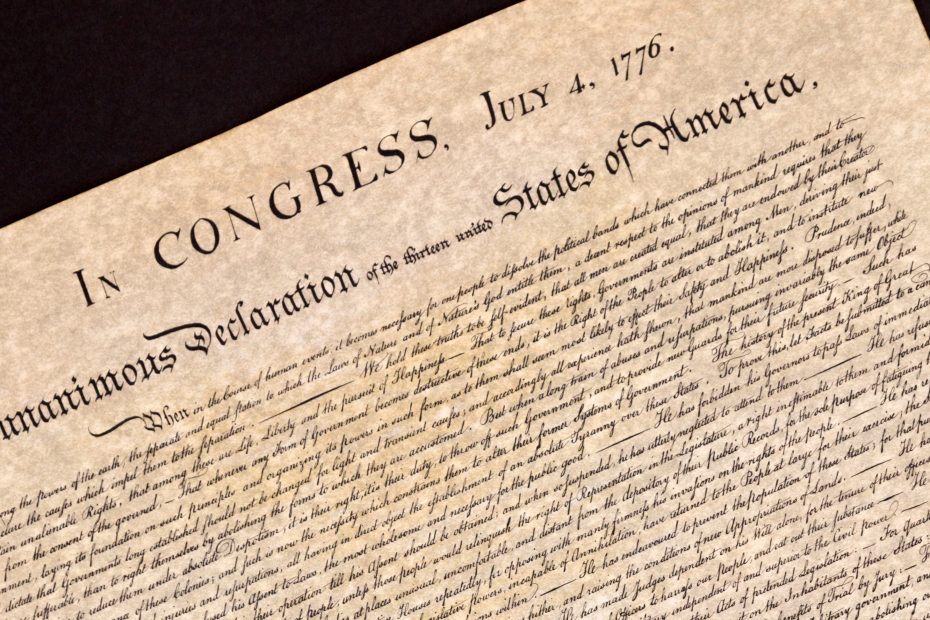 On July 4, 1776, in Philadelphia, our Founding Fathers signed a document declaring our independence from the tyranny. But what many Americans don’t realize is that with the same document, we not only declared our independence from Great Britain, we just as strongly declared our dependence upon God. The Declaration of Independence begins by proclaiming that this nation is dedicated to the proposition that all men are created equal and endowed by our Creator with certain unalienable rights. It ends: “With a firm reliance on the protection of Divine Providence we mutually pledge to each other our lives, our fortunes, and our sacred honor.” The signers of the Declaration were staking everything on God watching over them and seeing them through in their struggle for freedom.. The spirit of 1776 was one of trust in God.

After they unanimously approved the Declaration of Independence on July 2, and it was signed on July 4, the first public reading of the Declaration took place on July 8, and it was celebrated by a band and the ringing of bells. And the very first bell they rang was in the belfry of the very hall where they approved the Declaration of Independence. They rang that bell, we know it as the “Liberty Bell.” Where did it get its name? The name comes from the Scripture that’s imprinted on the bell. Leviticus 25:10 “Proclaim liberty throughout the land unto all the inhabitants thereof!”

Here is a history of the story of the Liberty Bell. In September of 1777, the republic was only a year old and its army, commanded by Gen. George Washington, faced a crisis. Washington was unable to keep the British out of the capital city of Philadelphia, having lost the Battle of Brandywine. The nation was about to fall into enemy hands. The British believed that if they could occupy the capital, this “colonial rebellion” could be stopped. During a war, metal becomes scarce, so it was feared that the British might melt down the city’s church bells and the bells of the State House, including the bell we now know as the Liberty Bell. So, it was decided to remove the eleven bells from the city so they would not fall into enemy hands. The bells would eventually make their way to Allentown, 50 miles to the north, for safekeeping while the British occupied Philadelphia. A train of 700 wagons was organized to carry the bell and other important items to a safe place. Carefully camouflaged by hay and manure, the Liberty Bell and other bells were transported with their guard of 200 cavalrymen, arriving in Bethlehem, PA on September 24, 1777. That night the bells were hauled to Allentown where they were hidden under the floorboards of old Zion’s Reformed Church. There, they remained in safety until the following July. By the end of June, 1778, the British had evacuated Philadelphia and the Liberty Bell and the church bells were restored to their rightful places.

Christopher Columbus in 1504 wrote his reason for setting forth to discover a new land to be: “I was led of the Holy Spirit to carry the message of the Gospel to undiscovered lands.”

You are familiar with the Pilgrims who came there to Plymouth Rock on the Mayflower. Just as they landed, they joined together in what is called the Mayflower Compact in 1620. These are the words of the Mayflower Compact: “In the name of God, amen. Having undertaken for the glory of God and for the advancement of the Christian faith, do solemnly and mutually in the presence of God, covenant and combine ourselves together.”

In 1643, just about 23 years later, as more and more people came to the shores and up in New England, the Puritans formed a confederation called The New England Confederation. This was the first written constitution of groups meeting together in 1643. The New England Confederation Constitution began: “Whereas we all came into these parts with one and the same end and aim, namely to advance the kingdom of our Lord Jesus Christ, and to enjoy the liberties of the gospel in purity and peace.” America was founded by men and women who acknowledged God’s supreme rule over our lives.

The Delaware Charter defines the purpose of their Colony, “To further propagate the Holy Gospel.” The Virginia Charter assures the right for people to live in “Christian peace” and instructs the people to: “Propagate the Christian religion to such people who yet live in ignorance of the true knowledge and worship of God.” The Rhode Island Compact: “We submit our persons, lives, and estates unto our Lord Jesus Christ, the King of Kings and Lord of Lords.”

George Washington’s Personal Prayer Book: “Oh, eternal and everlasting God, direct my thoughts, words and work. Wash away my sins in the immaculate blood of the lamb and purge my heart by the Holy Spirit. Daily, frame me more and more in the likeness of thy son, Jesus Christ, that living in thy fear, and dying in thy favor, I may in thy appointed time obtain the resurrection of the justified unto eternal life. Bless, O Lord, the whole race of mankind and let the world be filled with the knowledge of thy son, Jesus Christ.”

John Quincy Adams who would become the 6th President said later in 1821 about the Declaration of Independence. He said: “From the time of the Declaration of Independence, the American people were bound by the laws of God and the laws of the gospel of Jesus Christ, which they all acknowledge as the root of their conduct. We all came together to obey the word of God.” Adams was also the chairman of the American Bible Society.

Patrick Henry: “It cannot be emphasized too strongly or too often that this great nation was founded not but religionists but by Christians, not on religion but on the gospel of Jesus Christ.”

Even President Thomas Jefferson in an address to Danbury Baptist: “The 1st amendment has created a wall of separation between church and state, but that wall is a one directional wall, it keeps the government from running the church, but it makes sure that Christian principles will always stay in government.” By the way, Jefferson wrote on the front of his Bible these words: “I am a Christian, that is to say a disciple of the doctrines of Jesus. I have little doubt that our whole country will soon be rallied to the unity of our Creator and, I hope, to the pure doctrine of Jesus also.”

Benjamin Franklin: I’ve seen a painting of the first Continental Congress. And many of you have heard the story of how they were discussing and they were debating about how the Declaration of Independence would be written. And finally, Ben Franklin stood and said, “Gentlemen, if it is true that not one single petal from any flower falls to the ground without escaping God’s attention, will the distress of this nation go unheeded? Let us therefore determine to seek His face.” At that suggestion 56 signers of the Declaration of Independence all went to their knees as one man and began to pray and seek the wisdom of God.

My son, Rick, has served in the Marines and now the Navy in the Middle East. About a week ago, he flew back home to the US after a year and a half deployment. He spoke about what it was like to see US soil after so long. As the plane banked to begin the descent to land, he could see all that green. After living in a desert for so long, the green of home was beautiful.

Although it is hard to have him gone for so long, I am very proud of him. He feels it is his job to keep us safe and free in a world where terrorists and terrorism abounds.

I thank God for all those, throughout history to the present, who feel called to protect us and give us the right to claim our freedoms. From our Founding Fathers to those who continue to serve our country to work for and safe guard our freedoms, I am grateful.

Psalm 33:12,
Blessed is the nation whose God is the Lord.

But perhaps what I am most grateful for is that we were founded as one nation under God.