The Good Samaritan, A Parable 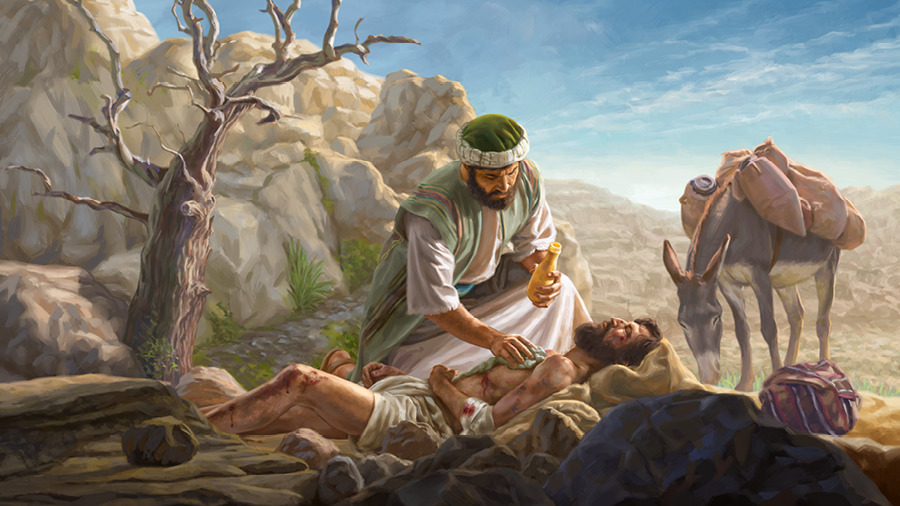 Few people really understand the United States Internal Revenue Service income tax regulations. There is a good reason for that. It is over four-million words long. The tax codes have become so complex that even the experts have a hard time understanding all the regulations. It is complex and burdensome.

The religious leaders in ancient Israel did the same thing. The Jews had thousands of laws. For example, there was one command that said you should not work on the Sabbath. They didn’t want to break this law, so they added what was called “fence laws” which were laws meant to help you avoid breaking the laws of God. No one ever worked harder at keeping the law than the Jews, particularly the Pharisees. They kept every minute detail of the law and in addition they kept all the fence laws. For example, the command was “remember the Sabbath and keep it holy.” That meant to them you can’t do any work on the Sabbath. One of the fence laws they adopted said, “you can’t drag a chair across the floor on the Sabbath, because that creates rows in the dirt floor, and you know what that is, that is plowing. It is working. In time, this thing they called the Law, got out of hand. People forgot which laws were from God and which laws men added.

Of all the many parables that Jesus told, the parable of the Good Samaritan is one of the best known. This parable is about a man who stopped to help another. A man had been ambushed, stripped, robbed, and left for dead. Others had hurried by, too busy with their own affairs to be interrupted. Then a Samaritan on his way down to Jericho encountered the wounded Jew lying alongside the road. The Samaritan, who was hated by the Jews, would be expected to pass by, but he had compassion.

Luke 10 25 On one occasion an expert in the law stood up to test Jesus. “Teacher,” he asked, “what must I do to inherit eternal life?”

This question was asked Jesus by a legal expert who specialized in the interpretation and application of more than 600 Jewish commandments. It is asked in response to Jesus’ statement that the greatest commandments of the law were, first, to love God, and second, to “love thy neighbor as yourself.”

28 “You have answered correctly,” Jesus replied. “Do this and you will live.” 29 But he wanted to justify himself, so he asked Jesus, “And who is my neighbor?”

So, the motive behind this question is the desire to limit who could be considered one’s neighbor. The Lord Jesus answered this question by telling the story of the Good Samaritan.

30 In reply Jesus said: “A man was going down from Jerusalem to Jericho, when he was attacked by robbers. They stripped him of his clothes, beat him and went away, leaving him half dead. 31 A priest happened to be going down the same road, and when he saw the man, he passed by on the other side. 32 So too, a Levite, when he came to the place and saw him, passed by on the other side. 33 But a Samaritan, as he traveled, came where the man was; and when he saw him, he took pity on him. 34 He went to him and bandaged his wounds, pouring on oil and wine. Then he put the man on his own donkey, brought him to an inn and took care of him. 35 The next day he took out two denarii and gave them to the innkeeper. ‘Look after him,’ he said, ‘and when I return, I will reimburse you for any extra expense you may have.’

Jesus describes a normal trip a person would take going through the mountainous pass that fell 3,300 feet along the 17-mile route from Jerusalem to Jericho. The road winded through many narrow passes and by many large rocks providing bandits many opportunities to prey on travelers. Robbers in the Middle East were known to beat their victims only if they resisted. It can be assumed that this fellow tried to keep what was his and consequently suffered a severe beating. The robbed Jew was also left naked and unconscious on the main business road from Jerusalem down to Jericho.

Fellow travelers soon happened by. In verse 31, “And by chance a priest was going down on that road, and when he saw him, he passed by on the other side.

A priest, a descendant of Aaron, was the highest official in the Jewish religion. The priest crosses to the other side of the road and continued on to his important business. The bleeding man may have looked dead but Rabbinical law required him to bury any corpse he found.

In verse 32, Likewise a Levite also, when he came to the place and saw him, passed by on the other side.

Levites, descendants of Levi, carried out the tasks of religious worship and operation. He saw the man and crossed over to the other side also.

They were religious leaders. One would expect that they’d have compassion for this wounded man.

A Samaritan made his way down to Jericho and encountered the wounded Jew lying alongside the road. Others had hurried by, too busy with their own affairs to be interrupted. A despised Samaritan, who were hated by the Jews and would be expected to pass by, if not make things even worse, saw the injured man. Unlike those before him, he was filled with compassion.

36 “Which of these three do you think was a neighbor to the man who fell into the hands of robbers?”

37 The expert in the law replied, “The one who had mercy on him.” Jesus told him, “Go and do likewise.”

Compassion will change our priorities. Sometimes God will interrupt our day. He is giving us an opportunity to serve someone in need.

One early Christian writer, Jean-Pierre de Caussade, said, “Love is the duty of the present moment.” No matter what else we may have planned, love is our duty.

The Samaritan pulled the man out of the ditch and bandaged his wounds, pouring oil and wine on them. He put him on his own donkey, brought him to an inn and took care of him.

God places severely beaten people in front of those with eyes to see. Some of them are lonely. Some feel rejected. Some are discouraged.  What does compassion cost? It can take its toll on your emotions. It takes some of your energy. It costs time. We need to pray for the spiritual strength necessary for giving help to the distressed people around you.

The Good Samaritan gave the innkeeper money to provide care for the recovering man for several days and then promised the innkeeper he would return to pay any additional expenses. Charge it to me, not to the beaten and broken man.

There are people around us who are suffering. Let’s be the one who stops to help.

One summer, my husband Dave and I, took the kids on an 11,000-mile road trip around the United States. I remember how Dave would stop and help every single traveler he found broken down along the way, sometimes even though I objected. Running across four lanes of traffic, that is going who knows how fast, seemed iffy to me. But he stopped and helped as best he could every time. I’m glad he did.

A young woman backpacking in Colorado encountered another woman hobbling down a mountain trail. On one foot, she wore an improvised shoe made of green twigs wrapped with a strip of cloth. “Lost one boot crossing a stream,” she explained. “Hope I can get down the mountain before dark.”

The first hiker reached into her own pack and took out a sandal. “Wear this,” she said. “You can mail it to me when you get home.”

The woman gratefully accepted the sandal and set off down the trail. A few days later the sandal arrived in the mail with a note saying: “Several people passed by me who noticed my predicament, but you’re the only one who offered any help. It made all the difference. Thanks for sharing your sandal with me.”

Real love takes action. The Bible says, “Let us not love in word or in tongue, but in deed and in truth” 1 John 3:18.

36 “Which of these three do you think was a neighbor to the man who fell into the hands of robbers?” 37 The expert in the law replied, “The one who had mercy on him.” Jesus told him, “Go and do likewise.”

The Lawyer states that the man who had mercy was the one who proved to be a real neighbor. To love God is to show love to your neighbor. “Who is my neighbor?” Jesus answers, “The person in desperate need I’m placing in your path.”

A neighbor is not necessarily someone whose home is near ours, or even one who is an acquaintance. The Samaritan had never met the traveler who had been robbed and wounded, nor was he even a fellow countryman.

However, there were three criteria which did make him a neighbor: (1) he was someone whose path had crossed that of the Samaritan; (2) he had a real need; and (3) the Samaritan had the ability to meet that need. Since all three criteria were met, then there was an obligation, and the Lord has told us to do likewise.

Make Me a Blessing by Luther Barnes