The Armor of God 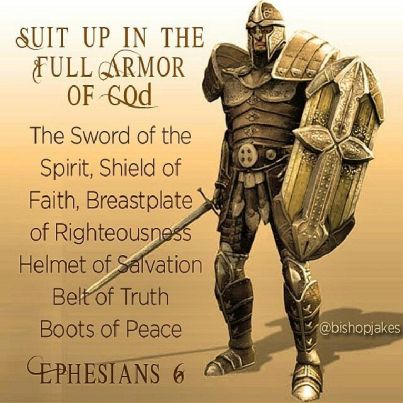 Prior to world war II, France believed they had a solution to a potential German invasion. They built what was called the Maginot line. The Maginot line was a defensive line built in the 1930’s that stretched for over 200 miles on the NE border of France. Military experts praised the Maginot Line as a work of genius, believing it would prevent any further invasions from the east. It was state-of-the-art, built of thick concrete with living quarters, heavy guns, store houses and underground rail lines. There were 45 main underground forts, 97 smaller underground forts, 352 large guns that could rise out of the ground. They were connected by an underground railroad system and underground corridors. French soldiers had state-of-the-art living conditions: air-conditioning, dining facilities, and a power plant.

It was designed to hold off a German attack. However, the Germans defeated the French simply by going around it through Belgium and through the Ardennes forest, which the French considered impenetrable. The French weren’t prepared and had a false sense of security. This ultimately led to the Battle of the Bulge. In the end, the Maginot line didn’t fully serve its purpose.

France fell because they underestimated their enemy and relied on the wrong weapons. They didn’t anticipate the attack their enemy used. They thought they were protected, but weren’t.

We too are in a war. It’s a war against satan. In order to defeat the attacks of our enemy, we must be armed with more than just the right weapons. We must not underestimate our enemy’s cleverness. And, we must not rely on our own weapons and armor. We need to rely on the armor and strength of God to defeat the attacks of satan. The Armor of God. We are in a spiritual battle against the forces of darkness. You might think that is a quote out of Star Wars but it was a reality long before it was a movie script.

There is a spiritual battle which goes on every day and the apostle Paul tells us in Ephesians 6:10-18 we have spiritual armor that we are able to put on to protect us. 10 Finally, be strong in the Lord and in his mighty power. 11 Put on the full armor of God, so that you can take your stand against the devil’s schemes. 12 For our struggle is not against flesh and blood, but against the rulers, against the authorities, against the powers of this dark world and against the spiritual forces of evil in the heavenly realms. 13 Therefore put on the full armor of God, so that when the day of evil comes, you may be able to stand your ground, and after you have done everything, to stand. 14 Stand firm then, with the belt of truth buckled around your waist, with the breastplate of righteousness in place, 15 and with your feet fitted with the readiness that comes from the gospel of peace. 16 In addition to all this, take up the shield of faith, with which you can extinguish all the flaming arrows of the evil one. 17 Take the helmet of salvation and the sword of the Spirit, which is the word of God.

18 And pray in the Spirit on all occasions with all kinds of prayers and requests. With this in mind, be alert and always keep on praying for all the Lord’s people.

Spiritual warfare is very real. God has given us specific tools to use in our daily spiritual battle. The devil looks for a small break in our armor. He seeks out the weak spots. He looks for where we are most vulnerable and that is where he begins his assault.

Every so often, I find a tarantula in my house. It’s true. I looked it up. It is related to the tarantula. It is huge. I used to freak out when I saw one. Not anymore. What really freaks me out now are ticks. Lyme disease has put things in perspective for me. But it makes me wonder. How do these varmints get in the house? Maybe they find a way in through a small hole somewhere. Maybe they crawl in through a window that was only open a little. Maybe one of the grandkids left a door wide open.

The Devil works in the same way. He searches and looks for a small hole, a crack, or a door we have left open and takes the opportunity to attack. Paul tells us in Ephesians to not give Satan any access. He tells us to “Be strong in the Lord and in His mighty power” and to “Put on the full armor of God, so that you can take your stand against the devil’s schemes. In John 8:44 Jesus says this about the devil, He was a murderer from the beginning. He has always hated the truth, because there is no truth in him. When he lies, it is consistent with his character; for he is a liar and the father of lies.

Satan is a liar, he will try to convince you that a lie is the truth. He will tell you that you are weak. He will tell you it’s okay to do what you want to do even if it is wrong. Paul tells us in 2 Corinthians 11:14, for Satan himself masquerades as an angel of light. We need to know the Word of God so that we are not deceived by his lies. James tells us in James 4:7 humble yourselves before God. Resist the devil, and he will flee from you.

God already has the victory and we also have the victory through the strength and power of God. Ephesians 6:13 put on the full armor of God, so that when the day of evil comes, you may be able to stand your ground. Ephesians 6:14 Stand firm then, with the belt of truth buckled around your waist. The Roman soldier wore a tunic or outer garment that served as his primary clothing. Most of ancient combat was hand-to-hand. A loose tunic was a hindrance and a danger. Before a battle, the tunic was carefully secured by a heavy leather belt, the same belt that also held the soldier’s sword. Our Spiritual armor is not a leather belt, it is the belt of truth.

We need to know the truth of Scripture by reading it and studying it. Paul tells us in Ephesians 4:14 Then we will no longer be infants, tossed back and forth by the waves, and blown here and there by every wind of teaching and by the cunning and craftiness of people in their deceitful scheming. Ephesians 6:14 Stand firm then, with the belt of truth buckled around your waist. with the breastplate of righteousness in place,

A Roman soldier would never go into battle without his breastplate, a tough, sleeveless piece of armor that covered his full torso. It was often made of leather or heavy linen. Stitched onto it were overlapping slices of animal hooves or horns or pieces of metal. Some of the breastplates were made of large pieces of metal molded or hammered to fit and protect the soldiers heart, lungs, intestines, and other vital organs.

In ancient Jewish thinking, the heart represented the mind and the will, while the intestines were considered the place of emotion and feelings. The mind and the emotions are two areas where the devil seeks to attack. He whispers in our ear to tempt us to think wrong thoughts and to feel wrong emotions.

There is the belt, the breastplate, then in Ephesians 6:15 15 and with your feet fitted with the readiness that comes from the gospel of peace. A Roman soldier’s life could depend on his shoes. Marching on rough, hot roads, climbing over jagged rocks, trampling over thorns, and wading through streams with jagged stones, his feet needed protection. A soldier with blistered, cut, or swollen feet cannot fight well and may not even be able to stand up. Our spiritual footwear is equally important. These Spiritual shoes give us the ability to stand firm knowing that we are at peace with God.

16 In addition to all this, take up the shield of faith, with which you can extinguish all the flaming arrows of the evil one. Roman soldiers used several kinds of shields, but there were two that were most common. The first was a small round shield, two feet in diameter, secured to the arm by two leather straps and it was relatively lightweight. This shield was used to block the sword blows of the enemy in hand-to-hand fighting. The second shield was the thureos, which Paul refers to here. This shield was about two and half feet wide and four and a half feet high. It was designed to protect the entire body of the soldier. The shield was made of a solid piece of wood and covered with metal or heavy oiled leather. The soldiers who carried these shields were in the front lines of battle and normally stood side by side with their shields together, forming a horizontal wall extending as long as a mile or more.

In New Testament times, the tips of arrows would often be wrapped in pieces of cloth that had been soaked in pitch. Just before the arrow was shot, the tip would be lit and then shot at the enemy troops. The arrow not only pierced the body, it could inflict serious burns and destroy clothing and gear. The shield had a covering of metal or leather soaked in water. It was reliable protection against flaming missiles to deflect or extinguish them.

Every day we are faced with a continuous bombardment of temptation. Every temptation is the temptation to doubt and distrust God. 1 John 5:4 says every child of God defeats this evil world, and we achieve this victory through our faith. The shield of faith protects us from the lies of the enemy.

17 Take the helmet of salvation and the sword of the Spirit, which is the word of God. The Roman soldier would never go into battle without his helmet. Some helmets were made of thick leather covered with metal plates, others were of heavy molded or beaten metal and they usually had cheek pieces to protect the face. Why does our head need protection? The devil directs his attacks at our assurance of salvation that is ours through faith in Jesus.

The armor is to withstand the attacks of the enemy, but the weapon we carry is the Sword of the Spirit, the word of God. In the first century, when the Roman foot soldiers were involved in hand-to-hand combat, a sword was the central weapon for victory in warfare. The sword Paul refers to here is the machaira. This sword varied in length from six to eighteen inches and was carried by Roman foot soldiers. This sword could be pulled out quickly and thrust into an enemy and then quickly pulled out to attack another.

2 Timothy 3:16-17 All Scripture is inspired by God and is useful to teach us what is true and to make us realize what is wrong in our lives. It corrects us when we are wrong and teaches us to do what is right. God uses it to prepare and equip his people to do every good work.

Are you dressed and ready for battle? May each of us daily put on and use the full armor of God.

Exodus 14:14 The Lord shall fight for you, while you hold your peace.”